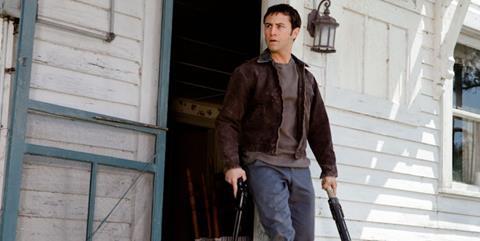 A spectacularly cool time-twisting sci-fi thriller, Rian Johnson’s Toronto opener wonderfully shows that smarts and action-adventure can go hand-in-hand. Breezily freewheeling, visually stunning and impressively complex, Looper is brimming with ideas, action and heart as well as having the star power to click with audiences.

Looper may prove too thoughtful to fully engage with fans of all-action fare, but in truth it has the perfect balance of smarts and explosions, witty dialogue and impressively staged action scenes, and great performances and high concept.

Writer/director Johnson – who made Brick and The Brothers Bloom – keeps the audience on its toes with a resolutely smart script that changes pace and direction at ease, heads into dark, disturbing, territory yet never loses track of the rules of its genre.

Time-travel sci-fi thrillers are always the movies that tend to leave filmmakers open to fan-boy ridicule, and while at times Looper heads into interweaving corners that it finds hard to get out of, its sheer force of intelligence – and a healthy dose of set-piece action sequences – means it is also gripping and provocative.

In the mid-21st century, time travel has been invented but ruled highly illegal, but is being exploited by the criminal fraternity. When gangs of the future want someone killed, they pop him in a time travel device and send him back 30 years into the past where the victim is assassinated by hired assassins called ‘loopers’.

One such looper is Joe Simmons (Jospeh Gordon-Levitt), one of the best in the business who waits patiently on the edge of a corn field with his ‘blunderbuss’-style weapon in hand in the year 2047 to efficiently kill whichever masked victim is transported to him. After dumping the body he heads back to the city where he is saving his payments for the future…he has plans to travel, but is enjoying the lifestyle far too much.

The only retirement plan for loopers is if their boss – actually from the future but overseeing hits back in the past - Abe (a charismatic Jeff Daniels) decides they are surplus to needs and their victim turns out to be their future self. Joe sees what happens when a looper decides not to go through with a contract when his close friend Seth (Paul Dano in a telling cameo) gets on the wrong side of Abe and his trigger happy goons, led by Kid Blue (Noah Segan).

Joe, though, is supremely confident in his abilities, though heavy drug use (taken via eye-drops) and a faltering love for exotic dancer Suzie (Piper Parebo in a refreshingly raunchy role, a nice change from her nice-girl TV appearances), sees him increasingly on edge.

Things go wildly out of control when at his next hit his victim arrives unmasked (usually they have a sack over their head) and Joe quickly realises that he is looking into his own eyes circa 2077 (Bruce Willis). He can’t pull the trigger, and before he knows it he overpowered by the balding dynamo and the fiftysomething Simmons is on the loose.

The plot throws in a whole series of mind-bending changes of direction – especially when the reason for Simmons-the-elder’s presence in the past is revealed and how dark and bloody his single-minded mission actually is – as Simmons-the-younger has to track down his older version.

This takes him to a remote farm occupied by Sara (a nicely strident Emily Blunt) and her young son – and we are only probably at the half-way point of the film by now – and where Looper gets even more complex and strange as old-fashioned sci-fi action-adventure gives way to more cerebral sequences and the film really starts to examine the philosophical implications of the deeply weird and complex situation the characters find themselves in.

The film marks the third time Joseph Gordon-Levitt has worked with Rian Johnson – he starred in Brick and had a quick cameo in The Brothers Bloom – and Looper more than confirms his leading man (in an action film) credentials. He proved he could carry the gun in Inception, but here he gets gun-battles and fist-fights with veteran action star Bruce Willis and more than holds his own. Willis becomes more and more important as the film draws on, and despite his terrible actions he is an oddly sympathetic character – as well as being the one who really explains the implications of the film’s time travel concept.

Looper may prove too thoughtful to fully engage with fans of all-action fare, but in truth it has the perfect balance of smarts and explosions, witty dialogue and impressively staged action scenes, and great performances and high concept.