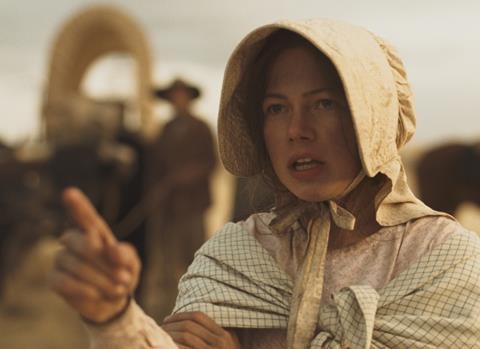 It is a bold move for indie favourite Kelly Reichardt to put her own distinctive subtle spin onto the Western genre, and while the presence of the likes of Michelle Williams, Will Patton, Paul Dano and Bruce Greenwood will guarantee respectful reviews it will be tough to find a mainstream audience for her nuanced tale of settlers toughing it out on the Oregon trail.

It is an elegantly crafted film that makes the most of its stunning locations and intricate sense of period detail, though use of the rarely used 1:33 format means that Reichardt draws attention to the travails on the unsmiling settlers rather than the bleak but beautiful vistas.

Meek’s Cutoff is clearly a low-budget affair…there is no vast wagon train here, instead just three wagons drawn by cattle, led by the knowall guide Meek (Bruce Greenwood, lurking behind a beard that wouldn’t be amiss in ZZ Top) who is leading the families through the Cascade Mountains in around 1845.

As with previous films Old Joy and Wendy and Lucy, Kelly Reichardt uses sparse dialogue (which actually suits the families’ tough journey), instead allowing the film to focus on then harsh realities of life on the trail. Her previous films, though, had moments of playful humour…there are no laughs to be had in Meek’s Cutoff.

As their water supply dwindles the settlers grow more and more concerned and start to doubt Meek’s abilities to lead them. He captures a scout (Rod Rondeaux) from the Cayuse tribe, wanting to kill him. Instead feisty Emily Tetherow (Michelle Williams) convinces he should be saved, and they begin to trust the Native American to lead them to water.

The film menders along, but ultimately goes nowhere…and perhaps that is the point. The performances are all nicely judged, though the characters are never really drawn out, apart from that of Michelle Williams. Paul Dano is given little to do as a fresh faced young pioneer, while Zoe Kazan as his wife is simply there as a shrill doubter set to burst into tears at any moment. Meek’s Cutoff, though, is at its best presenting the tough life of the stoical women settlers…with their long dresses and bonnets to keep out the sun, they walk proudly behind their wagons, having a faith that the promised land lurks just over the next horizon.

There is even a Tarantinoesque indie standoff moment when Meek wants to shoot the scout and Emily has to save his life by training her rifle at him. There are no shots fired, but is the nearest thing to action we get in the entire film.

Kelly Reichardt wonderfully captures the brutal toughness of the pioneer life while also wonderfully dwelling on the bleak and almost alien landscape, and while the film is an earnest and intense experience, it is also a chore at times. It was well received in Venice where it played in competition, and cast and Reichardt’s strong indie pedigree point to a good response and solid sales.