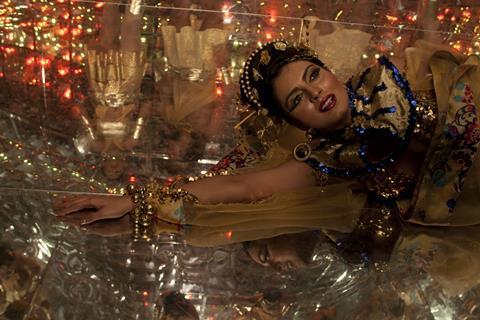 This tragic confrontation between two brothers, set during the 1980s in the lower depths of Bombay’s film industry, copies the look of the lurid Z-grade films the two of them are churning out together with a remarkable degree of success. So much so, that it may well put off both regular movie audiences expecting a more conventional approach and the regular customers of the genre, who demand a lot more titillation, sex, violence and gore, than Ahluwalia’s film is ready to provide.

My Lovely offers a bleak, sordid but apparently faithful portrait of the nervous self-destructing tension of the world in which it takes place.

Introduced in Cannes as the harbinger of a new kind of Indian cinema, neither Bollywood nor art house fare, this approach, mixing the more doubtful qualities of Western and Indian cinema, has still a long way to go before finding its own voice.

The older of the two brothers, Vicky (Anil  George), is a domineering, unscrupulous operator who even tries, unsuccessfully, to skim some of the profits off the mob financing him. His younger sibling, Sonu (Nawazuddin Siddiqui), unhappy but submissive, is his errand boy, going out to collect the money from customers, bringing in the girls who’ll drop their knickers (off Ahluwalia’s camera) at the slightest incentive and providing the drugs and the booze which keeps all this industry going.

One day, however, he sees Pinky (Niharika Singh), falls in love and decides to make a movie star out of her. Acting is not necessary he tells her, the look in her eyes is quite enough. He ignores, however, that behind Pinky’s apparent purity there is a long past, well known to his far more experienced brother.

The tortuous plot, whose details aren’t always very clear and spreads over a period of six years, drags in the murder of another sex starlet in which the two brothers risk being involved. Meanwhile, Sonu goes to jail for a crime he did not commit and when he comes out, no one is left to stand by his side.

Looking for all purposes like a badly-lit home movie shot with a restless hand-held camera, just the right approach to achieve the aspect of the films it talks about, My Lovely offers a bleak, sordid but apparently faithful portrait of the nervous self-destructing tension of the world in which it takes place, of the squalid sights, the disaffected alleys and the gutted houses in Bombay’s slums, of the corruption and the brutality of crime and law alike.

But, Ahluwalia has a hard time telling a story of any kind, even as unoriginal as this one is, establishing anything more than clichéd characters or following any kind of sequence continuity. His film gallops ahead regardless of any need for clarity, his shots tied up together in the kind of elliptic editing that may be just too much of an effort to keep up with. One-dimensional performances are not much help either.