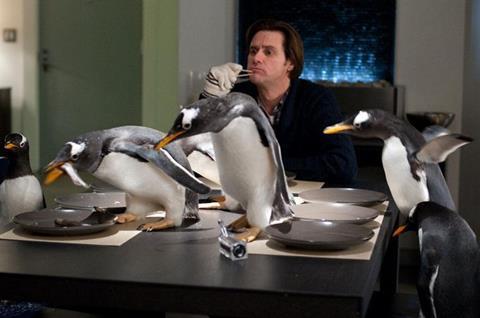 Jim Carrey adopts a kinder, gentler version of his aggressively manic comic persona for Mr Popper’s Penguins, a sweet but not particularly funny family comedy loosely based on the classic American children’s book of the same name. Carrey and his penguin co-stars will certainly give the film cross-generational appeal though maybe only enough of it to make Popper’s a mid-level entry in the burgeoning kid-lit adaptation genre.

Worldwide distributor Fox will be hoping that Carrey’s pulling power, which hasn’t been tested in a mainstream comedy for several years, is still strong  when the PG-rated film opens in North America on June 17. International results are likely to vary depending on local familiarity with the 1938 children’s book and Carrey’s popularity in a market.

The film retains only the premise of the story from the Richard and Florence Atwater book, turning Tom Popper (Carrey) from a Depression era house painter into a modern day work-consumed Manhattan real estate developer with an ex-wife (Carla Gugino from the Spy Kids films) and two children (Madeline Carroll and Maxwell Perry Cotton) he attempts to bond with on alternate weekends.

When his long absent explorer father sends him a parting gift of six live penguins, Tom at first tries to get rid of the unwelcome and out of place visitors. Eventually, however, he falls for the birds, turns his swanky apartment into an icy penguin habitat and begins to understand the value of his own of family.

Carrey himself is less funny yet more likeable than he was in his Ace Ventura comedic heyday and Angela Lansbury adds to the warmth of the tone with her performance as a potential property seller who sees past Mr Popper’s salesman charm.

The penguins, of course, are hard to resist, though their charm is undermined a bit by the overuse of CG effects to enhance the real bird performances.