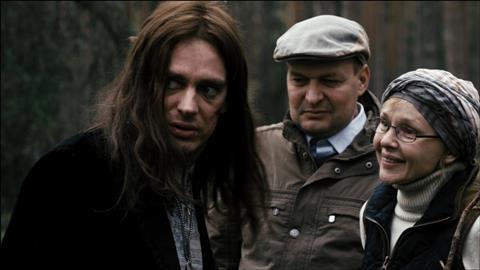 Mushrooming (Seenelkäik) is a mix of political satire and broad comedy that is certainly different from the more abstract and avant-garde films from Estonia that have proved popular on the festival circuit over the past few years. The film received its world premiere in the East of the West Competition at the Karlovy Vary International Film Festival.

Given the world economic climate the gleeful skewering of corrupt politicians and their masters should also resonate with audiences outside of Estonia.

Aadu Kägu is a stone-faced politician whose party is trying to ensure that he’s more popular with the general public. On the day that he decides to go mushroom picking with his wife – and the drifting rock star Zak who has hitched a lift with them – a scandal regarding Kägu’s expenses erupts.

As the trio soon find themselves blindly lost in the woods, the party higher-ups are jumping for joy while one particular member of the public, who makes his home in the forest, is determined to make their lives even more miserable that it already is.

While the film does suffer from not being sure what it wants to be (as it lurches from comedy to drama and even horror at some points) there’s still plenty here to enjoy. Some fun performances (especially from Raivo E. Tamm as the deadpan Kägu and Elina Reinold as his suffering wife) buoy everything along and Hussar has a good eye for both physical comedy whilst allowing room for more thoughtful moments of social commentary.

Given the world economic climate the gleeful – and sometimes biting – skewering of corrupt politicians and their masters should also resonate with audiences outside of Estonia. While international distribution may be a long shot, the film (which has had a generally positive reaction after its Karlovy Vary screenings) should find itself screening at a few more festivals over the coming months.