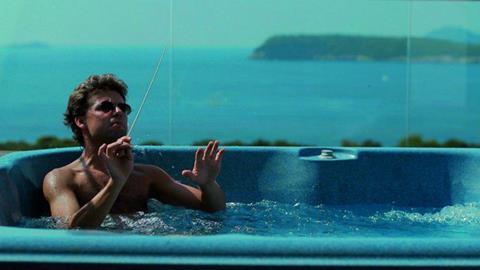 This irreverent mockumentary, poking fun at music festivals and their star-studded casts, should easily appeal to music lovers everywhere, as long as they do not mind taking their favorite pastime with a pinch of salt and some pepper too.

This documentary is ultimately not only enjoyable on its own but also a great piece of advertising for the “Julian Rachlin and Friends” Music Festival in Dubrovnik.

Shot at an event organised by violinist Julian Rachlin in Dubrovnik on the Adriatic coast, once a pirate refuge and now a picturesque Croat tourist attraction, the idea was devised by Rachlin’s friend Aleksey Igudesman, and produced by both of them, with full cooperation of all their “victims”. The film screened at the Karlovy Vary Film Festival.

Director Igudesman lacks any real filmmaking background, but has a knack for serving up music in mischievous packages, for instance his “A Little Nightmare Music”, a show he presents with Korean pianist Joo Hyung-ki (featured in the film as well).

For this particular prank he is assisted by Austrian filmmaker Sebastian Leitner (credited for camera and editing). The two of them were let loose on the 2010 edition of the festival, where Igudesman quickly managed to step on all the wrong toes, insulting the participants at the worst possible moments, to the point that most of them got up and left their interviews in the middle.

However, this being a mockumentary, and since Igudesman himself actively contributed to the programme of this festival, it is safe to assume that before talking out of turn he had warned all the concerned parties, who may pretend to be offended on camera, but don’t make much of a fuss about it all, carrying on as if short, stocky, impish director and his film crew are just a minor disturbance.

The tone is established from the very beginning. Igudesman shows Rachlin the final cut of the film, to get his approval. They sit next to each other in a sound studio, and once the film starts rolling you see John Malkovich addressing the audience at the festival and informing them that the talent they will be listening to in the following days has not been chosen for its musical talent but simply because they are Jews and as everybody knows, the music world is ruled by the Jewish mafia.

A few minutes later, Igudesman sits down next to Sir Roger Moore, who later in the festival will read, with a musical accompaniment, Beethoven’s Heiligenstadt Testament. When Igudesman enquiries about the qualities of one of the musicians, ex-James Bond actor drily informs him the man was selected only because “he is my wife’s lover”.

Later in the film, Igudesman rolls off in front of Moore the list his favorite Bonds, starting with Sean Connery and going through all the rest, without ever mentioning the man sitting next to him, at which point Moore stands up and walks away. Just like Scottish violinist Nicola Benedetti and her boyfriend, cellist Leonard Eischenbroich, after Igudesman suggests they have been invited to the festival only because of their good looks.

One of the most hilarious sequences, devised for the festival by Igudesman and presented by Malkovich, is a collection of particularly spiteful writings of composers about other composers, like Tchaikovsky and Hugo Wolff venting their rage against Brahms’ music. The climax of the sequence comes when Malkovich starts reading the vitriolic pieces by an unnamed Turkish critic written about Malkovich himself, demanding the actor should be stopped at the customs and sent back home before entering the country.

Rachlin, pretending to be shocked at all this footage and uneasy at his nose obsession being prominently featured, protests time and again that this is not the film he had in mind. But no need to worry, he is a full-fledged partner to the party and admits that much before it’s over. Making best use of the lovely Dubrovnik scenery and generously sprinkled with chamber music warhorses such as one of Brahms String Sextets and Schubert’s String Quintet, this documentary is ultimately not only enjoyable on its own but also a great piece of advertising for the “Julian Rachlin and Friends” Music Festival in Dubrovnik.