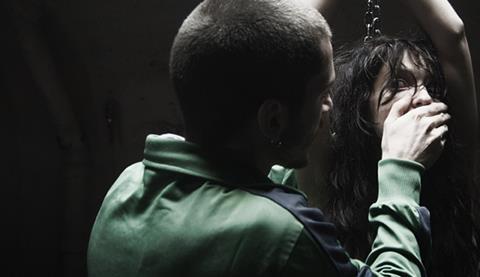 While waiting for the digital effects of their science fiction film The Arrival Of Wang (L‘arrivo di Wang) to be competed, Antonio and Marco Manetti – who sign themselves The Manetti Brothers – put together this basic 3D horror film.  The haste shows in an overlong first act that dawdles along with the characters before the secrets of the luxurious villa where most of the film takes place begin to be revealed.

Not quite as strong and unusual as The Arrival Of Wang, this still marks the Manettis out as promising genre talents.

After a prologue in which a maid meets a nasty fate for showing curiosity about what’s going on in the basement and an illustrated credits sequence which establishes a fairytale feel, the film introduces three young, irresponsible Roman guys – Simone (Lorenzo Pedrotti), Ale (Domenico Diele) and Marco (Claudio Di Biagio) – who happen, because one of them works in a garage, to be able to drive a sports car owned by the dignified Marchese Lanzi (Peppe Servillo), who is out of town at a veteran vehicle rally in Switzerland (his other car is a Rolls).

In the glove compartment, they find the keys to the Marchese’s villa – and, though opinions differ within the group about the advisability of this, decide to hold a party on the lavish estate, though the lack of servants which makes this possible will also set genre buffs’ danger alarms ringing.

Too much larking-about delays the revelation that the secret in the basement is Sabrina (Francesca Cuttica), a naked girl chained up seemingly for the Marchese’s perverse pleasure.  Simone, the most sensitive of the guys, tries to free the oddly unforthcoming victim, but is caught when the Marchese – whose Rolls has broken down because of shoddy work done in the garage – returns unexpectedly.

From then on, the film is a runaround, with the callous, refined aristocrat (one of his kinks is shaving his captive’s pubes, though he seems not to show sexual interest in her) stalking the inept intruders.  The horror business, augmented by a few 3D stunts, is standard, but the situation isn’t as clear-cut as it seems and the finale is effectively downbeat.

Screened at FrightFest, home to rather too many other films involving chained and abused women, Paura (which translates as ‘Fear’) takes a slightly different tack with well-worn material – the villa is a spectacular location and Cuttica and Servillo, imprisoned princess and beastly Bluebeard, do a great deal with their enigmatic characters.

The normal folk are less well portrayed, and suffer from the quite common horror film problem of pretty much always doing the wrong thing, which makes the stretches where they are imperiled less suspenseful than they might have been.  Not quite as strong and unusual as The Arrival Of Wang, this still marks the Manettis out as promising genre talents.