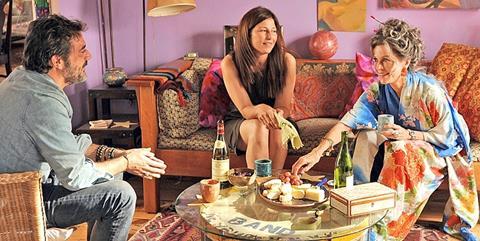 Two-time Oscar winner Jane Fonda has been an infrequent screen performer over the past two decades. A tailor-made role in Peace, Love & Misunderstanding provides a rare opportunity for audiences to see what they might have been missing. She is as charismatic and committed as ever playing a superannuated hippie who lives as if the world was permanently stuck in the counterculture values of 1969.

Peace, Love is contrived and lacking in bite.

Sadly, her screen return is one of the few pleasures in an otherwise trite, half-hearted, family drama in which every development could be predicted within the first five minutes of the story. A talented cast and picture postcard locations will attract some television sales and ancillary possibilities but Peace, Love & Misunderstanding is too lightweight and forgettable to stand much a of a chance theatrically.

Opening scenes quickly establish that Manhattan lawyer Diane (Catherine Keener) is trapped in a lifestyle that she neither recognises nor desires. When a divorce is agreed, she collects daughter Zoe (Elizabeth Olsen) and teenage son Jake (Nat Wolff) and heads to Woodstock for a visit with their grandmother Grace (Jane Fonda). The fact that the two women have not spoken in twenty years provokes little in the way of dramatic conflict which is indicative of the way the film will stretch credibility to breaking point.

Fonda is good value as the liberal, free-spirited Grace, a woman who still protests against the war, grows her own marijuana, believes in the healing power of crystals and the benefits of howling at the moon once in a while.

Grace seems like a composite of the real-life Fonda and Shirley MacLaine but the casting of Fonda also raises the ghost of the Oscar-winning On Golden Pond. Peace, Love explores similar territory in the bitterness and resentment that divide a daughter and a parent, except on this occasion the younger generation are repressed and unforgiving whilst the older generation are warm and emotionally open. Such comparisons only serve to remind you of the real heart and soul that went into On Golden Pond.

Within days of arriving at grandma Grace everyone seems to have found a new love of their life with Diane drawn to hunky carpenter/songwriter Jude (Jeffrey Dean Morgan), the feisty Zoe bowled over by Walt Whitman-loving butcher/dreamboat Cole (Chace Crawford) and even geeky, aspiring filmmaker Jake finding a game girlfriend in Tara (Marissa O’Donnell). Naturally, Jake has been filming everything in sight so everyone gets the chance to watch their faults and failings before a group hug finale.

From the hugs to the heartaches, the home truths to the easily won resolutions, Peace, Love is contrived and lacking in bite. It would be great to hope that Fonda might start to increase her film appearances but on the basis of the disappointingly bland Peace, Love & Misunderstanding she needs to choose her scripts more wisely.