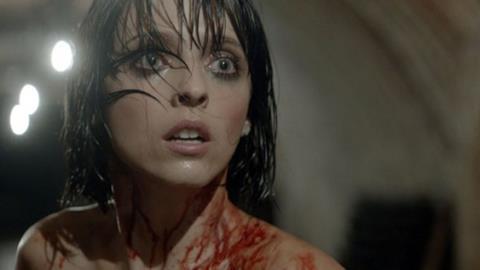 Co-directed by Paco Plaza and Jaume Balagueró, [●REC] (2007) was an early entry in the docu-look ‘found footage’ horror cycle and introduced a distinctive breed of demon-possessed zombie who rank as Spain’s most significant horror franchise creation since Amando de Ossorio’s Blind Dead series of the 1970s.  In addition to a US remake (Quarantine) and its direct-to-DVD sequel (Quarantine 2), [●REC] has been followed by Plaza and Balagueró’s [●REC]² (2009) and now a third entry directed solely by Plaza.  [●REC] Apocalypse is in development.

It’s mostly familiar stuff, and finds the series turning in on itself, going for jokes rather than suspense – but is a more successful new direction than the murky [●REC]².

In [●REC]³ Génesis a long pre-credits sequence returns to the found footage style of the earlier entries, as two cameramen set out to document the elaborate wedding of an attractive young couple, Clara (Leticia Dolera) and Koldo (Diego Martín), whose combined extended families move from the church to a large estate for a luxurious reception. The fim premiered at SXSW.

Taking place concurrently with the events of the first two films, the demonic infection is brought to this social gathering by Uncle Victor (Emilio Mencheta), a veterinarian bitten by the dog from the first film, whose puckish smile persists even after it becomes apparent that he’s not drunk but homicidally possessed.

On the assumption that the found footage cycle is exhausted, there’s a ‘Scenes We’d Like to See’ moment as Koldo takes away and smashes the camera of an idiot who is filming the disaster, and the frame expands to a more conventional, objective approach.

Zombie apocalypses haven’t been thin on the ground lately, either – and this takes an amiable, gruesome, jokey tack that aligns with the Evil Dead series or early Peter Jackson (and even the similarly farcical Spanish killer babe vs zombies epic Sexykiller).

The plot spine is the just-marrieds’ love for each other in extremis and determination to get back together after they’ve been separated in the crisis, with Koldo taking mediaeval armour from a shrine to St George and the sword used to cut the wedding cake to become a knightly champion while Clara shreds her confining bridal dress with a handy chainsaw (exposing a red garter) and cuts through her former friends and relations insistent that this is still her special day.

There are good joke characters – a children’s entertainer who calls himself John Sponge so as not to break copyright, a spy from the music licensing agency who has crashed the wedding to collect royalties – and some newish wrinkles, like the way the zombies demon-selves are seen in mirrors and their susceptibility to the word of the Lord.

It’s mostly familiar stuff, and finds the series turning in on itself, going for jokes rather than suspense – but is a more successful new direction than the murky [●REC]².  The stunning Dolera, lately in the UK TV serial Mad Dogs, has great presence as perfect bride and bedraggled zombie-fighter.