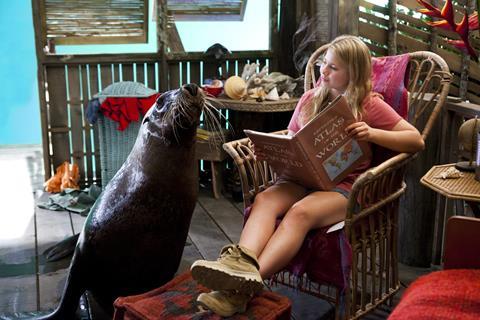 The film is a family-friendly follow-up to the commercially successful 2008 Australian movie Nim’s Island that starred Abigail Breslin as 12 year-old Nim, nature-loving child of a marine biologist. Five years later and very much a teenager, Nim is here played by Bindi Irwin, daughter of the late environmentalist and ‘crocodile hunter’, Steve Irwin, and proves herself a confident, appealing actor. The adventure gets a Hallmark TV premiere in the US on March 15 before an Australia-wide school holidays theatrical release starting March 28.

But it’s Bindi Irwin who is the focus of the movie. Onscreen most of the time, she’s fresh and convincing as child of the rainforest, friend of all living creatures and emerging, confident young woman.

Nim’s treehouse home, entered via an exhilarating ‘flying fox’ ride through the island jungle, is where her scientist father (Lillard) – played by Gerard Buter in the original - works with his “chubby nerd” assistant Felix (Derrick), researching species. The plot thickens when Dad visits Queensland Government authorities on the mainland to fight the threatened building of a tourist hotel on his beloved island.

While he’s away a yacht-load of villains, led by nasty Booker (Waters), comes to the island, guided there by Edmund (Wallace), a handsome young teen whose earlier incarnation appeared in the first movie.

There’s some striking camerawork by Judd Overton among the trees, along the pristine beaches and under the sea. Nerida Tyson-Chew’s full score is perhaps overhelpful in telling us what’s going on: it’s a while since comic relief has been accompanied by cuckoo calls. Excellent graphics are provided by Phillip Radford.

But it’s Bindi Irwin who is the focus of the movie. Onscreen most of the time, she’s fresh and convincing as child of the rainforest, friend of all living creatures and emerging, confident young woman. And her American accent will do no harm when this genuinely exciting, green yarn gets its first wide Hallmark showing.