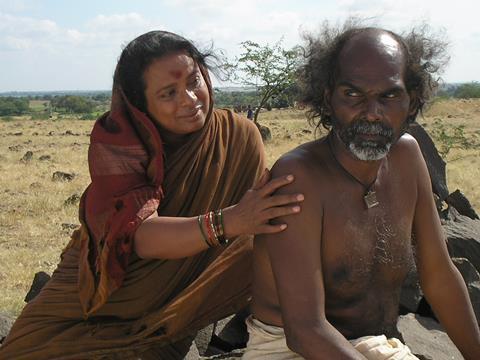 Girish Kasaravalli’s Riding the Dreams (Kanasemba Kudureyaneri), screened at the Mumbai Film Festival, is part of India’s reality cinema savoured by a small, but devoted, audience. In fact, Bengaluru-based Kasaravalli’s films have never been big crowd-pullers, and this movie is not likely to be an exception.

The film is a brilliant study of how India’s poorest of the poor struggle to survive in awfully degrading conditions.

Already part of the festival circuit, it was shot on the outskirts of Bijapur in the southern Indian State of Karnataka, and follows the life of a grave-digger, Irya (Vaijanath Biradar), and his wife, Rudri (Umashree). Literally eking a living off the dead, Irya worships, Siddha, the messenger of death who appears in his dream every time someone in the village dies.

Alerted about the death of the old landlord, Gowda (Akki Chennabasappa), Irya begins to prepare the grave, but he is perplexed when Gowda’s caretaker, Mathadayya (Sadashiv Brahmavar), denies that his master is dead. Irya and Rudri begin to worry about the dreams going wrong, and their lives getting even more depressing.

The film is a brilliant study of how India’s poorest of the poor struggle to survive in awfully degrading conditions, going hungry to bed night after night. Kasaravalli draws a moving comparison between Irya’s righteous principles and those of the landlord’s rich son, Shivanna (Shivaranajan), who callously leaves the father’s corpse to rot while he finishes a long business engagement. There is an unmistakable message here, of how the urge to make money destroys values.

Kasaravalli, one of the pioneers of the New Indian Cinema of the 1970s, and known for works such as The Ritual (Ghttashraddha) and Tabara’s Story (Tabarana Kathe), remains undaunted in the face of big slick-looking productions, continuing to make movies that he strongly believes in.

And he has a set of dedicated actors. Engagingly convincing, Biradar and Umashree are seen throughout the movie in tattered clothes, getting every inch into the characters. Manohar’s lilting background score is perhaps the only artifice here.