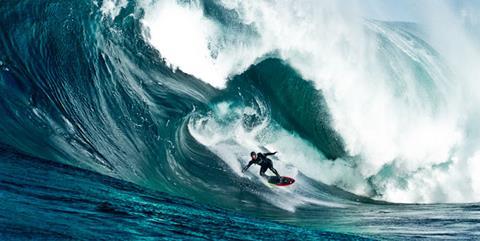 The sheer in-yer-face ability of 3-D film technology seems perfectly suited to adventure documentaries such as Storm Surfers 3D – a theatrical spin-off of the Aussie TV series – allowing the audience to really get into the gigantic waves as it follows aging big wave surfers Tom Carroll and Ross Clarke-Jones on the hunt for “un-surfed” waves.

The engaging thing about the film is that it dwells as much on the two surfers’ sense of aging (both are approaching 50) as it does the obsession with tracking down the next big wave, and while it might lack much in terms of insight in the emotional draw of surfing, it delivers in terms of spectacular waves and weather.

The pair of surfers make for an engagingly oddball duo. A former two-time world champion, Carroll is struggling with injury, age and awareness of his family responsibilities though still relishes the big wave action. In contrast Clarke-Jones is laid-back, fun-loving and apparently reckless at times. The pair work with surf forecaster Ben Matson to try and predict where big new waves will appear, and is looking miles offshore to find something new and exhilarating for the surfers.

The 3-D cameras were installed on jet skis, surf-boards and – most impressively – miniature hand-held devices as they surf through tubes and down the face of massive waves, which helps capture some astonishing footage.

Surf films make for great full-on adventure entertainment and Storm Surfers 3D is no different. The film is ideal for event  - and possibly IMAX screen – programming and while offering nothing radical in terms of surfing insight it is packed with stunning visual moments.