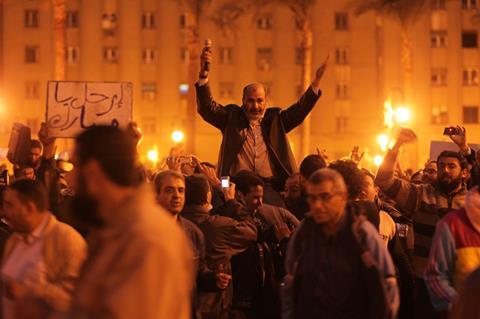 This gripping and at times moving documentary – which is essentially three films from up-and-coming directors assembled to make a whole – is a timely examination of the 2011 Egyptian revolution and its aftermath, and is a likely must-have title at film festivals…especially those with a human rights element.

This is a film about people – and it is their testimonies linked to the vivid and at times startling images that gives Tahrir 2011 its impact.

It is a fascinating snapshot of a remarkable occasion and displays the power of modern technologies – from mobile phones and Facebook through to mini digital recorders – to record an event and give it a powerful sense of place and emotion.

But regardless of technologies, this is a film about people – and it is their testimonies linked to the vivid and at times startling images that gives Tahrir 2011 its impact.

The three films cover three distinct areas. Tamer Ezzat’s film The Good details the demonstrators in Tahrir Square who recall the incidents and violence; Ayten Amin’s film The Bad looks into the attitude of the police, while Amr Salama films The Politician dwells on former Egyptian leader Hosni Munark.

To a degree The Good is as might be expected. A series of interviews linked to footage from the protests that details the passion and determination of the movement and the savage implications of the reaction from official forces. Though perhaps more intriguing is The Bad which sees Ayten Amin talking to the police and security forces. Her intriguing interviews – some shot in shadow and others with policeman who agreed to be interviewed openly – offer a skewed insight into their actions.

Amr Salma’s film The Politician looks at Mubarak and his attempts to cling onto his leadership while around his it was clear that support was falling apart. The film also offers up a moment of humour – a list titled “How To Become A Dictator in 10 Lessons” details how use of hair-dye (apparently there was a whole hair-dye line devoted to Mubarak) through to perpetuating a dynasty can enable a tyrant to keep control over his people.