The Autobiography Of Nicolae Ceausescu 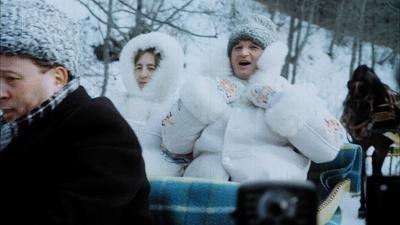 A protracted but nevertheless fascinating experiment, the third part of Andrei Ujica’s loose trilogy about the end of communism builds a biopic of the man who ruled Communist Romania for 24 years entirely from existing footage, most of it from the regime’s own newsreels, with no added narration.

There’s something to be said for the editor/director’s technique of letting footage of party meetings and speeches run and run.

The result, for those disciplined enough to cope with the grueling three-hour-plus running time, is ‘The World As Seen By Ceausescu’: a surreal place full of motorcades, happy flag-waving workers, unanimous votes at party congresses, and well-stocked supermarkets in a country that for much of his reign suffered from severe food shortages.

It would be relatively easy to trim overlong sequences to produce a theatrical version of half the length, but even at ninety minutes this is never going to have the punters queuing around the block, but there’s something to be said for the editor/director’s technique of letting footage of party meetings and speeches run and run: the rituals of Communist power were always interminable, and a certain dose of tedium is part of the film’s point. Further festivals, academic institutions and quality TV outlets are the most likely next stops for Ujica’s docu-biography.

Opening with the by-now familiar video footage from the hastily arranged military court that sentenced Ceausescu and his wife Elena to death on Christmas Day 1989, the film soon backtracks to the beginning of the dictator’s reign with the funeral of Nicolae’s mentor and predecessor Gheorghe Gheorghiu-Dej in 1965.

In the first ten years or so of his reign there seems to be a genuine spirit of enthusiasm for Ceausescu at home, in a country that was taking a cautious distance from the rest of Eastern Europe: we’re reminded here of his opposition to the Soviet-led invasion of Czechoslovakia.

An eerie effect is created by the insertion of footage as it was found: sometimes sharply shot and framed, at others fuzzy or pixilated; sometimes with sound, at others silent or accompanied by strange buzzes and hums, which provide the cue for the film’s ominous sound design.

The word ‘autobiography’ in the title – and some added music – is the director’s only attempt to narrate his subject externally. It points our attention to the origin of much of this footage in official party-sanctioned films or TV broadcasts, which are intercut here and there with some rare home movie footage showing Ceausescu and his wife on holiday by the Black Sea or in the Carpathian mountains. In other words, this is how Ceaucescu wanted us, and his happy, clapping fellow countrymen, to see him.

The shy country boy turns gradually, as the sixties proceed, into a rather dapper leader with a nice line in suits and a sharp intelligence glittering behind his beady eyes. By the end though, when megalomania had set in, he is a frail and deluded figure, increasingly isolated. When visiting his final folly – the vast House of the Republic palace which he had built in Bucharest in the purest ancient regime style – he seems an anxious and shrunken man, looking up at the chandeliers and marble as if to say “What have I done?”