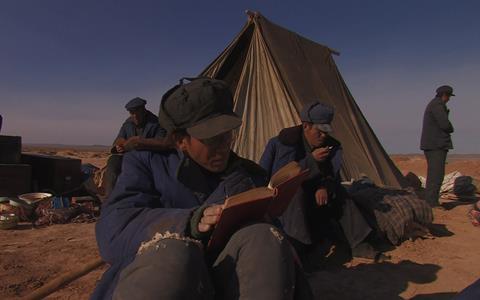 A grueling ordeal of a film, documentary maker Wang Bing’s first fictional feature tells the story of China’s gulags – primitive reeducation camps in the Gobi desert for those of its citizens branded by the regime as ‘Rightists’ in the late fifties. Unveiled at the last minute as the surprise film in this year’s Venice competition, it’s a stark, powerful but also unremittingly bleak work that plumbs the misery of what man can do to man in the name of an ideology.

It seems destined to play only to the toughest arthouse audiences, though it’s also a work whose historical relevance should give it a long-tail shelf life.

Though possessing a savage life force, and images of cruel and harsh desert beauty that stick in the mind long after the lights have gone up, this is a grindingly austere drama that makes serious demands on its audience’s resilience. It seems destined to play only to the toughest arthouse audiences, though it’s also a work whose historical relevance – plus Wang Bing’s growing stature and reputation as a Chinese auteur – should give it a long-tail shelf life after a brief theatrical outing in a handful of cineaste territories.

One of the most impressive, but also chilling, things about the film is the way the Gobi desert setting becomes a harsh mother. The camp prisoners perform senseless manual tasks in the cold, sand-laden wind – like digging the ditch that gives the film its title. They sleep in underground dormitories excavated in the compacted sand, and when they die – as they do in droves – are wrapped in their own bedcovers and buried in graves so shallow that they are exposed by the wind before long, leaving the desert slopes littered with mummy-like corpses.

Based on survivors’ memoirs – some of them gathered in Yang Xianhui’s book Goodbye, Jiabianjou (the name of the camp featured in the film) – The Ditch was shot in secret, bypassing official film-board channels, and has the tang of accuracy. But its dramatic strategy, close to melodrama for all the minimalism of the film’s style, is to start off with a terrible situation and make it worse. As the Chinese famine of 1960 takes hold, already skimpy rations dry up, and prisoners are reduced to crawling across the desert to glean some sustenance from spiky wild plants, or catch gerbils and eat them raw. When one throws up, another eats his vomit; there are even cases of cannibalism. The prisoners’ loss of energy and humanity is charted unflinchingly.

Characters like Xiao Li – one of the few to maintain a semblance of humanity even at the darkest moments – emerge from the grayness. At a certain point one of the wives of a prisoner turns up to search for her husband – and then when she discovers he recently died, begins a desperate search for his body in the desert.

There’s no doubting the director’s indignation at one of history’s great injustices. Some of the most telling moments come in the rare moments when the film is not trying to pile on the misery – like one prisoner’s revelation that he was sent to the camp because during a party meeting he had the temerity to suggest that the formula “dictatorship of the proletariat” should be replaced with “dictatorship of the people”.