The Flowers Of War 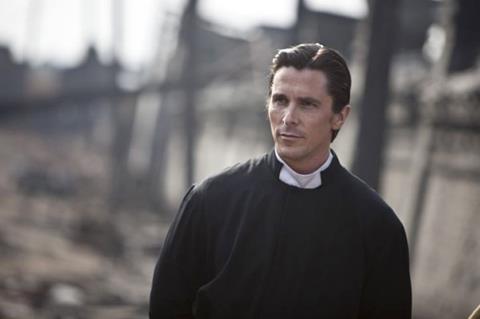 Zhang Yimou’s eagerly awaited Nanjing epic The Flowers Of War is a well-made character-driven war movie as old-fashioned and sentimental as any vintage Hollywood offering. The film is a shrewd blend of gritty action and intimate drama, which takes place largely in the confines of a cathedral acting as a refuge for a group of Chinese and one American during the Japanese invasion of the city in 1937.

Bale is a tad hammy as the self-interested American who finds his heroic streak, but the supporting actors are all luminous.

China’s submission for the foreign language film Oscar, it is about 60% in Mandarin and 40% in English; indeed the presence of English-speaking star Christian Bale in the leading role should give it a commercial stretch in international markets far beyond the average Chinese title.

The film is representative of a new breed of Chinese blockbuster that eschews the artistic experimentalism of the Fifth Generation of filmmakers (of which Zhang Yimou was a major part) and goes for the commercial jugular. The Flowers Of War contains characteristic Zhang elements – moments of visual poetry, breakout performances from talented newcomers, elegant camerawork and sumptuous design – but its storytelling is broad and unsubtle, as far from the quiet nuance and subtlety of Ju Dou and Red Sorghum as you can imagine.

The film feels positively melodramatic viewed alongside Lu Chuan’s stark, documentary-style 2009 picture City Of Life And Death, which laid out the horrors of Nanjing in stark black and white detail.

It opens locally on December 16, and wide Chinese audiences will no doubt embrace this big budget portrait of an event that is scorched on the national psyche. In the international market, it will act as a test whether a Chinese film with mainstream sensibilities and western elements will be accepted by audiences.

US distributor Wrekin Hill, for example, is banking on the Bale name to break it out of the arthouse, and international sales agent FilmNation has been far more aggressive with the film than would be the case for your average Zhang Yimou title.

The film opens in a hail of gunfire as the Japanese enter the city. Two school girls race back to the Christian cathedral where they are studying in convent school and on their way encounter John Miller (Bale), an opportunistic mortician visiting the city on a job. Miller,  the girls and a young boy called George (Huang), who was the assistant to the late priest hole up in the cathedral compound.

They are joined by 13 prostitutes from a nearby brothel who take sanctuary in the cellar; the motley crew struggles for food and harmony, while attempting to escape the interest of the invaders.

The story– based on Geling Yan’s novel - is a little thin for the 145 minute running time and the confined setting (an impressive set of the cathedral innards), but there are enough action scenes and dramatic moments of Nanjing horror to keep its drama engaging.

Bale is a tad hammy as the self-interested American who finds his heroic streak, but the supporting actors are all luminous – including beautiful newcomer Ni Ni  heartbreaking as the head hooker Yu Mo; Huang Tianyuan as the ballsy George and 13 year-old Zhang Xinyi as Shi, one of the school girls learning how to handle the realities of the occupation, especially when it becomes clear that their sexual innocence is under threat from the Japanese.

Screenplay: Liu Heng, based on the novel by Geling Yan