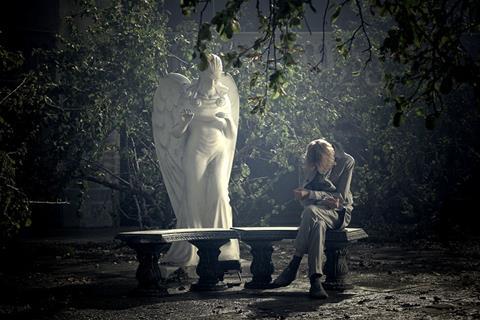 Based on the Dostoyevsky novel of the same name The Idiot (Idioot) is an impressively stylised piece of work that takes on elements of the surreal, Estonian theatrical tradition and even German Expressionism.

This has enough verve and inventiveness to make it a unique and enjoyable literary adaptation.

With an imminent domestic theatrical release and an international premiere at the Busan International Film Festival, the film should follow in the footsteps of The Temptation of St. Tony (produced by the same company) and prove popular on the festival circuit. However, it may prove too obtuse for even the most adventurous international art-house distributors.

The film follows Prince Myshkin, who comes to stay with a distant relative after a spell in a sanatorium caused by his epilepsy. He soon becomes entranced with the beauty of Nastassya Filippovna, a damaged woman who has drawn the affections of many men including the fiercely jealous Rogožin. But whilst Myshkin is falling for Nastassya Filippovna he also begins to have feelings for the artist Aglaja. Soon Myshkin earns the enmity of Rogožin and finds that trying to be a good person in a fundamentally bad world may be idiocy indeed.

Superficially faithful to the novel (though Russian literature aficionados may find too many narrative layers have been dispensed with), this is marked by some impressive acting (especially from Risto Kübar and Tambet Tuisk in the lead male roles) and equally impressive (and grandiose) set design that manages to offset some of the theatricality at the heart of proceedings. Mention must also be given to the eclectic soundtrack that manages to take in classical, 1960s beat and ‘80s pop that adds an extra air of weirdness to the film.

Whilst sometimes a little too arch for its own good, this has enough verve and inventiveness to make it a unique and enjoyable literary adaptation