The Rise And Fall Of A White Collar Hooligan 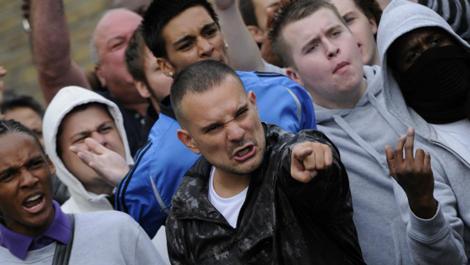 This appropriately gritty low-budget British crime film may well trade on the assumption that it is football hooligan film in the best cinematic tradition of The Football Factory, Green Street and Rise Of The Footsoldier, but in truth it is more of an old-fashioned London crime film with a little hooligan action on the side.

Nevern and Phillips do their best and strut about in standard criminal style.

There is the expected quota of rhyming slang (one wears a ‘whistle’….aka ‘whistle and flute’, meaning a ‘suit’) and relish for mindless violence, but The Rise And Fall Of A White Collar Hooligan is essentially about a young man out of his depth, unable to find work who is drawn into crime.

In this instance it is cloning debit cards to get easy money from innocent banks. Football fan and part-time hooligan Mike Jacobs (Nick Nevern) bumps into old pal Eddie Hill (Simon Phillips) during a spot of clichéd football violence and Eddie ends up offering him a job.

Soon he is making good money – cue scenes of boozing in flash clubs, drug taking and having random sex with blonde lovelies – but naturally disappointing his girlfriend Katie (Rita Ramnani) thanks to his loutish behaviour, drunkenness and suspicious surplus of cash.

There is a side trip to Paris – combing crime (in Euros this time) with a football match and a run in with some Gendarmes – when a blundering mistake sees Mike arrested. Shipped back to the UK he is quizzed by local police, but is eventually released. Welcomed back into the criminal fold (and handed a gun by the gang boss, played by Billy Murray) he finds himself way too deep into criminal activities, up against shotgun wielding Northerners and facing some hard decisions.

It is all pretty standard fare. Nevern and Phillips do their best and strut about in standard criminal style, though the film is littered with clichéd supporting characters and even the violence (which crops up fairly regularly) is routinely staged. The market for The Rise And Fall Of A White Collar Hooligan is very much in home entertainment (where the film goes after a speedy UK theatrical release), with international appeal likely to be limited.