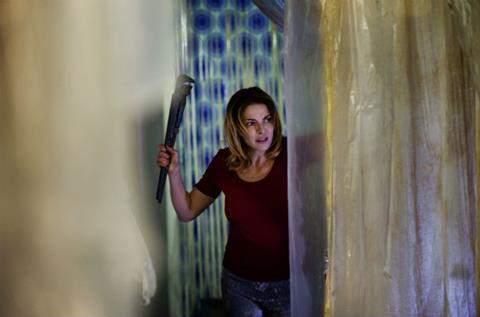 The cast are required to look impressive in designer clothes and gruesome prosthetics rather than give nuanced performances.

Though references to the international banking crisis establish a contemporary setting, Tulpa is a deliberate throwback to 1970s Italian gialli, with current screen diva Claudia Gerino in a role that would once have been earmarked for Edwige Fenech as a black-hatted, black-gloved killer stalking the members of Tulpa, an exclusive mystic Buddhist sex club to which the heroine belongs.

In one witty moment, banker Lisa Boeri (Gerino) zones out during a boardroom crisis when her boss (Michele Placido) is in a tizzy about a scandal exposed in the financial page of the newspaper but she notices a crime story on the opposite page about the murders of one man and two women she has had sex with.

Premiered at London’s Film4 FrightFest, Tulpa impressed with its elaborate horror sequences, charmed with its rickety plotting and weird supernatural angle and amused with stretches of oddly phrased English dialogue between subtitled Italian scenes.  Some tinkering may be carried out to remove tittersome lines (or return actors’ Italian voices to them) and trim interstitial scenes.

The fine distinction between magnificently absurd and simply foolish is mostly observed – though, despite several sustained attempts at misdirection, the whodunit angle is as transparent as it usually was in the 1970s.

With only a week to save her job, the bisexual heroine has to fend off co-workers out to undercut her favoured position with the much-married boss, though she is more worried by the Tulpa killings.  Everyone involved with the club is a suspect, including a seemingly nice young man who wants to continue their relationship outside the enclosed world of Tulpa.

Given that a tulpa can be an unconscious astral projection, the heroine even suspects herself of the crimes – especially when those inconvenient work rivals start getting added to the victim tally and a severed finger turns up in the fridge.  Connoisseurs of classic giallo will respond to the contrived mutilation murders, which include a nasty trick with barbed wire and a merry-go-round and the old nailed-in-a-box-with-starving-rats gambit.

The cast are required to look impressive in designer clothes and gruesome prosthetics rather than give nuanced performances, but the cadaverous Nuot Arquint – who played the spirit of death in Shadow – has a real presence as the proprietor of the ludicrous, yet surprisingly sweet sex club.

Though the widescreen cinematography doesn’t quite have the sheen of classic gialli, or equal the recent pastiches of the form in Amer and Berberian Sound Studio, the score - by Zampaglione, his brother Francesco and Andrea Moscianese – is a fond homage to Goblin and Morricone, but distinctive enough to stand on its own.