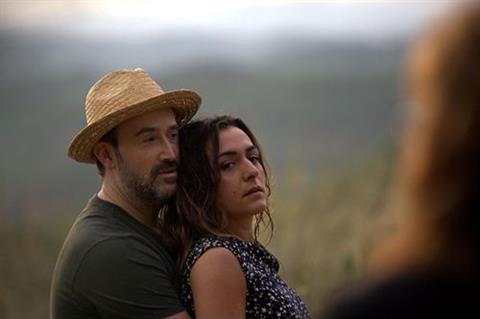 Possibly the most low-key of futuristic films ever seen, Isabel Coixet’s slow-burn two-handed drama is supposedly set in a gloomy Spain in 2017, detailing the unhappy, angry and tearful reunion of two lovers who both have a need to tackle emotional wounds yet to have healed.

The film wears its theatrical origins – it is ‘freely inspired’ from the play Gif by Lot Vekemans – as badge of honour, and while this allows for strong and determined performances from two leads Javier Camara and Candela Pena it also means the drama is hard to sustain at times as a piece of cinema.

In the outskirts of Barcelona a never-named couple meet up again after a five year interval at the cemetery where their dead son is buried. The cemetery is about to be destroyed, and they are there to say their final goodbyes…though as it turns out the occasion is more about their relationship (and its allusions towards Spain itself) to be talked over.

After the life-changing death of their son she stayed on in financially stricken Spain, while he went to go and life in Cologne. Their freewheeling conversation dwells on different ways of dealing with the financial crisis; on the strength and idealism needed to stay (with the implication that she has been involved in protests throughout the country; the pain of abandonment and – of course – the impact on them of their child’s death.

Yesterday Never Ends (Ayer No Termina Nunca) makes great use of the cemetery location – in fact the Igualada Cemetery – and while provocative and challenging at times, the pure hurt that these two have gone through makes for tough viewing, especially when there is little break up the unrelenting nature of the gloom and sadness that pervades their story.

Isabel Coixet – who also adapted the play – draws out impressive performances from Javier Camara and Candela Pena, and while intriguing, the film is rather too inaccessible and bitter to work beyond niche art house audiences, with this tortured and tormented couple’s coming together a pretty bleak assignation for all concerned.