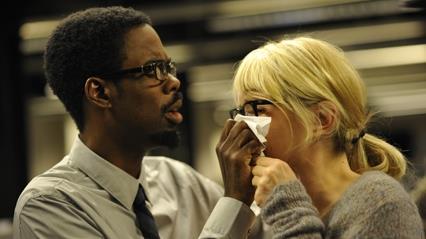 A manic comedy of manners, Julie Delpy’s follow-up to 2 Days in Paris is a mildly amusing, occasionally annoying romp about a French woman whose crazy family comes to visit her for 48 hours in New York City.

At the centre of the morass, Chris Rock tries to anchor the proceedings.

Delpy reprises her role from Paris as the neurotic, high-strung Annie Hall-inspired Marion, a Frenchwoman who lives with her infant son and new boyfriend Mingus (Chris Rock), who has his own young daughter. Everything is going well in their relationship, Marion tells us in voiceover—that is, until her infantile father, exhibitionist sister, and her sister’s slacker boyfriend, Manu, arrive, sending their domestic bliss into total chaos.

Much of the humor in 2 Days relies on tired cultural stereotypes, which might play to broad foreign audiences - consider the recent successes of such culture-class French hits Intouchables and Welcome to the Sticks - but many of the jokes fall flat.

For example, the first time that Manu makes a politically incorrect remark to Mingus (“Do you like Salt N Peppa, the rap group?”), it’s funny.But by the second and third time, it’s less so. European territories, which embraced Delpy’s first film, could do modest business with the picture, particularly with the Chris Rock curiosity factor, but let’s not hope for a 2 Days in Rome anytime soon.

The plot is built around several zany sit-com like scenarios, which build to increasingly frenetic screwball comedy. To prevent getting evicted, for instance, Marion pretends to have a brain tumor—a lie that continues to spin out of control. Or Marion’s big gallery opening climaxes with the character selling her soul in a piece of performance art—and then she fights to get it back (from Vincent Gallo, no less).

There’s clearly an attempt to channel early Woody Allen here, combining romantic comedy with surrealist diversions. But while the sequences are over-the-top and the narrative turns unexpected, they don’t follow. What self-respecting New York artist would have a show that combines photographs of their ex-boyfriend with a performance stunt involving the soul? Does it really take three hours to fix a door buzzer?

These are minor complaints compared with the movie’s bigger problem: Marion and her family’s hysterical antics—which include that of Delpy’s real-life rotund father, Albert Delpy—become less endearing than off-putting. The extremes in which Delpy paints them are just too broad to be believed—devouring their brioche and croissants like a pack of wild animals, or the sister parading around half-naked like some French cliché of libertinism.

Perhaps French audiences would laugh at themselves in the cracked mirror that is 2 Days in New York, but the film never stops its onslaught of banter and bickering to consider the film’s relationships as authentic.

At the centre of the morass, Chris Rock tries to anchor the proceedings. There’s a half-funny bit with Rock confiding in a poster of Barack Obama and a couple of witty exchanges between he and Delpy, particularly in the beginning of the film. But when the movie goes off the rails, there’s little the veteran comic can do to bring the movie back to its supposed romantic core.