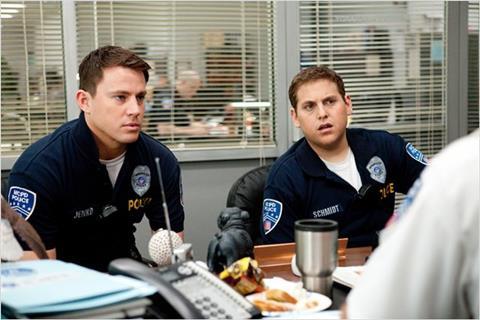 An irreverent reboot of the late 1980s TV series that helped launch the career of Johnny Depp, 21 Jump Street only half-heartedly scratches the surface of the more intriguing comedy of young male anxiety at which it hints, preferring instead to target broader laughs. If it gets bogged down a bit in its dutiful inclusion of procedural and action hijinks, the movie still sails on the strength of some of its joke writing, and the chemistry and smart use of its stars, Channing Tatum and Jonah Hill.

21 Jump Street seems to bear little in common with its source material save its name and basic premise.

Using a SXSW festival presentation to create a bit of buzz, 21 Jump Street opens Stateside on March 16, and should dominate a weekend absent any other major studio wide releases. Generally positive word-of-mouth and the amiable interplay of its leads give the film solid ancillary value in its demographic subset, and could additionally pave the way for a purported already-in-the-works sequel.

After forging a symbiotic bond during basic training, ex-high school classmates turned cops Schmidt (Hill) and Jenko (Tatum) screw up their first bust, and get shipped off to an undercover program to take advantage of their (relative) youthful looks. There, the belligerent Captain Dickson (Ice Cube) informs them of a dangerous new synthetic drug that’s already claimed the life of one local teenager.

Enrolled as mismatched brothers at Sagan High, Schmidt and Jenko are tasked with finding the dealers and cracking the supply ring. They make friends with Eric (Dave Franco) and Molly (Brie Larson), amongst other kids, but soon find themselves re-confronting social awkwardness and other issues they thought they’d left behind during their real high school tenures.

Not unlike I Spy and any number of other adaptations of old TV properties, 21 Jump Street seems to bear little in common with its source material save its name and basic premise. Co-directors Phil Lord and Christopher Miller, who brought an anarchic tone to the animated Cloudy With A Chance of Meatballs, inject their movie with a loose-limbed lightheartedness, but its whimsical impulsivity also comes to undercut its promise.

After nicely setting up a focus on the agony of adolescence, complete with flashback to its protagonists’ teenage years, 21 Jump Street only fitfully engages its two most amusing ideas — that environmental awareness, tolerance and a general culture of respect have neutralised Jenko’s innate advantage with the “cool kids,” and that Jenko and Schmidt’s false identities are accidentally switched, forcing them to additionally adapt to personas and class schedules outside of their comfort zones.

This portion of 21 Jump Street generates by far the most laughs. Unfortunately, the spirit of Superbad, a film which effectively commingled juvenile stakes with sentimentality and the turbulences of male bonding, falls victim here to a yawning junior cop plot.

There is also a needless compression of the movie’s timeline. This lends itself to other distracting hiccups, like a high school theatrical production being cast roughly a week before debuting and then bowing in the middle of the afternoon, and the fact that the big drug supplier supposedly wants a deal to go down literally at prom. By the time the movie descends to a character trying to pick up his shot-off phallus with his mouth, 21 Jump Street seems angling for empty shock, and not rooted in the best and richest contrasts of its characters.

Playing off his looks, Tatum showcases a nice sense of comic timing and straight-guy aplomb, even if it isn’t quite as revelatory as Mark Wahlberg’s turn in The Other Guys. Hill, fresh off an Oscar nomination for Moneyball, again flexes his comedic chops.

Ice Cube and Larson come off as tired and a bit lackluster, respectively, but other supporting performances are mostly strong. A rich and surprising third act cameo, meanwhile, provides a moment of wild, wonky uplift.

Screenplay: Michael Bacall, from a story by Michael Bacall & Jonah Hill, based on the television series created by Patrick Hasburgh & Stephen J. Cannell