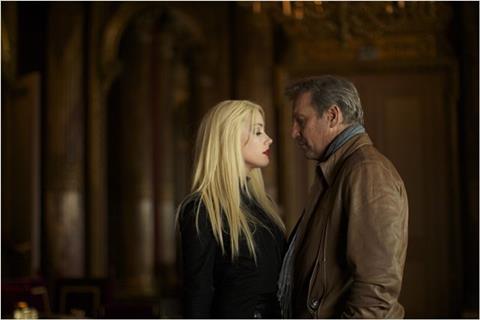 A potentially intriguing mixture of genres — dark comedy, action-thriller, family drama — produces a toxic stew in 3 Days To Kill, which finds Kevin Costner unconvincingly shedding his rugged, good-guy persona to play an amoral, badass spy. Directed by McG, the film has some of the gleefully loopy preposterousness that’s become a trademark of Luc Besson’s other EuropaCorp productions, but because none of its tones succeeds, 3 Days feels interminable, both too generic in its execution and too pleased with its irreverent attitude.

Whether it’s the stabs at emotional resonance or the action set pieces, 3 Days To Kill simply feels uninspired, its every twist and idea piled on in the hopes that manic exuberance will be confused for coherence.

Opening February 21 in the US, 3 Days To Kill seems destined to be only a modest theatrical performer. Costner’s moderate star power will be put to the test in a marketplace that already has RoboCop and will soon also include action fare like Pompeii and Non-Stop. With negative reviews helping to squash word of mouth, 3 Days To Kill should be quickly winding its way to DVD and cable, where audiences may be less choosy with their entertainment dollars.

Costner plays Ethan Renner, a CIA operative whose dangerous, secretive, world-traveling work has meant that he’s been largely absent from the lives of his estranged wife Christine (Connie Nielsen) and sullen teen daughter Zooey (Hailee Steinfeld). But after being diagnosed with terminal cancer and only given a few months to live, he decides to go to Paris to reunite with his family before his death. That’s when he meets Vivi (Amber Heard), a mysterious American operative who wants him to take out two nefarious terrorists known simply as The Albino and The Wolf. In exchange for helping her, Ethan will be given an experimental serum that could prolong his life.

Working from a script co-written by Besson (who devised the original story), McG balances Ethan’s hunt for the terrorists with domestic concerns: This superspy has to babysit his daughter while Christine is out of town for a few days. 3 Days To Kill hopes to produce comedic sparks from the juxtaposition of Ethan’s two worlds, interrogating baddies and engaging in high-octane car chases when he’s not trying to reconnect with Zooey and deal with her adolescent concerns about dating.

That’s a clever concept, but as with McG’s last film, the disastrous action-comedy This Means War, he shows little aptitude for integrating laughs and suspense. Whereas McG’s Charlie’s Angels films had their appeal because of his leads’ goofball performances, his latest radiates almost no charm. Instead, smugness reigns, as if the filmmakers can’t stop congratulating themselves for a tonal audacity that’s neither well executed nor that bold. (When 3 Days To Kill goes for laughs, they tend to be so broad and ridiculous that one can’t resist the occasional chuckle at the utter screwball lunacy of the whole endeavour.)

At the peak of his popularity in the late 1980s and early ‘90s, Kevin Costner made simple decency seem enormously appealing. In recent years, though, he’s added some shading to that image, playing shifty individuals in 3000 Miles To Graceland and Mr. Brooks. Though ostensibly the hero of 3 Days To Kill, Ethan is a cranky, unsentimental veteran spy, and Costner does what he can to make the character’s callous attitude toward the people he roughs up funny but also hip. But the same criticism that dogged other EuropaCorp movies such as The Family and Lockout applies to 3 Days To Kill: The film’s “shocking” antisocial demeanour can’t distract from the derivative story and cardboard characters.

3 Days To Kill’s tedious B-movie trashiness is best encapsulated in Heard’s winking portrayal of Vivi, a knowing homage to a thousand femme fatales before her but without a lick of wit. Heard can be enormously sultry and tart onscreen, but in 3 Days To Kill she mostly smokes cigarettes and wears absurdly tight outfits, cooing inane sexual innuendo at Ethan in between doling out exposition to further the plot. The character is an idea of movie coolness that hasn’t been given any development.

Likewise, Steinfeld has to play a typical angst-filled teen, and she doesn’t have the presence to bring anything to an underwritten role. This is unfortunate since she and Costner do eventually establish a warm father-daughter rapport that’s the only heart in this otherwise mechanical movie.

For all its thriller tendencies, 3 Days To Kill actually takes Ethan’s plight seriously, trying to wring some pathos from his regrets about the choices he’s made that have driven a wedge between himself and his family. But whether it’s the stabs at emotional resonance or the action set pieces, 3 Days To Kill simply feels uninspired, its every twist and idea piled on in the hopes that manic exuberance will be confused for coherence.

Screenplay: Adi Hasak & Luc Besson, based on a story by Luc Besson