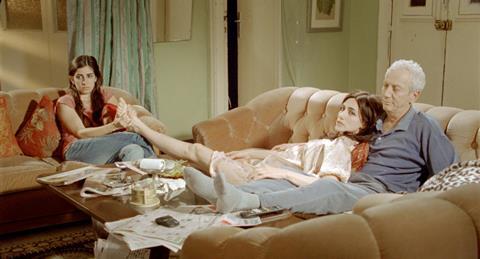 Leaving behind the rigorous style of Or,  for which she won the Camera D’Or five years ago, Yedaya’s first film since then is an unabashed, over-emotional, under-scripted Mediterranean melodrama with plenty of social and political undertones.

While it’s brave of Yedaya to change her style like this, she risks losing her reputation in the process. Her doomed inter-racial Israeli-Arab love story, once again using Ronit Elkabetz and Dana Ivgy, falls outside the arthouse and popular remits and will be a tough sell in both markets.

Jaffa’s schematic plot, predictably developed with stock characters that are never fleshed out, is insufficient to carry her pallid observations on the Israeli-Arab conflict, the status of women and conflict between the generations.

Mali (Ivgy) the daughter of a garage owner in Jaffa, falls for Tewfik (Shalabi) one of her father’s mechanics. The affair is however shadowed by the strained relations between the girl’s father Reuven (Moshonov), his high-strung, rebellious son Meir (Assaf) and his wife (Elkabetz), who seems vaguely dissatisfied with her life and family without any specific reason.

Mali and Tewfik are about to elope secretly abroad and get married, when a fistfight erupts in the garage. Tewfik pushes Meir who falls down badly and dies, Tewfik is sent to jail. Mali wants to abort the child she is bearing him, but thinks better of it at the last moment, does not divulge the identity of the father to her parents, and when the little girl is born, they name her Shiran and move to another part of town. Nine years later, Tewfik is released from jail and contacts Mali.

The real problem, this being a melodrama, is that none of the characters are sufficiently developed to deserve the audience’s full attention. The family conflicts, meanwhile, are banal and obvious, and the evident tension between Israelis and Arabs is barely probed beyond establishing that Israelis are the bosses and Arabs the workers, the older generation taking the situation for granted, the younger one beginning to challenge it.

Ivgy’s commitment to the role is evident, while both Moshonov and Elkabetz, the first better-rounded, the second over-hysterical, offer characters that suggest depths left unexplored. Sadly enough, both Shalabi and Hussein Yassin Mahajneh, who plays his father, are never allowed the space to be more than extras, a strange decision considering the fact that they are the other half of the Israeli-Palestinian equation the film clearly refers to.