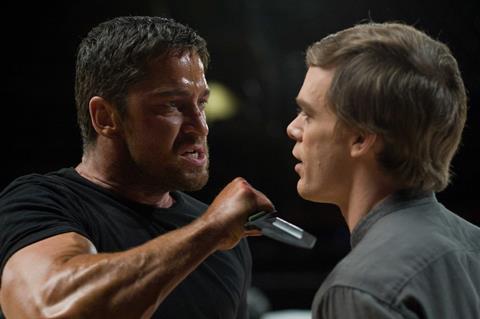 Marrying their cranked-up, high adrenaline style and penchant for adult content with an ambitiously plotted narrative, Gamer writing-directing duo Mark Neveldine and Brian Taylor craft a violent wild ride which hits all the demographic marks but also fails to satisfyingly explore the story it sets out to tell. If ever a movie tired of itself before an audience, this might be the one.

Technical credits, from editing and cinematography to sound design, are all heavily treated, to match Neveldine and Taylor’s caffeinated aesthetic

Free and clear of much direct action competition, Gamer should be met with a welcome reception by older genre fans. But its unabashed violence and copious flashes of nudity will most heartily connect in the DVD market, where teenagers too young to buy a theatrical ticket will eagerly lap it in repeat viewings. Gamer’s easy high concept should also help it out internationally as well.

Set several years in the future, Gamer stars Gerard Butler as Kable, the convict-star of a cross-platform videogame/TV smash hit, Slayers, not a million miles away from The Running Man scenario in which convicted murderers compete for freedom in wild, live-or-die group shootouts. The game is the latest creation of eccentric billionaire Ken Castle (Michael C. Hall), and like its groundbreaking predecessor, the Sims-like Society, its revolutionary, popular twist is that gamers are able to use other actual humans as avatars, controlling their every movement courtesy of neural implants.

With a wife (Amber Valletta) and daughter on the outside, Kable is eager to achieve something no other participant yet has: freedom. Three battles from pardon, however, Kable begins to sense that the fix is on, and he won’t be allowed to live. Convincing his superstar operator, 17-year-old Simon (Logan Lerman), to cut him loose, Kable breaks out of prison and sets out to save his wife from her enslaved Society employment. As he does so, darker truths about Castle’s future plans come to light, and the mystery of Kable’s initial incarceration is revealed.

Many of Gamer’s set pieces - a rave-set shootout, and Kable’s escape from the quarantined game area into the world at large - clearly have a much bigger scope than the movie’s budget affords. So Neveldine and Taylor, who wrote and directed Crank and its sequel, deserve some credit for making their vision work, even if their gamer fantasy world sometimes amounts to a grab-bag of clichés. And on a certain level you have to appreciate the sheer, nutty bravura of a movie with a tap-dancing fight scene set to Cole Porter’s I’ve Got You Under My Skin.

Where the duo stumble, though, is in where their stylistic barrage meets Gamer’s narrative. The hyperactive editing is a bad fit for the story, at least when the bullets aren’t flying. And fish-eye lens posturing (particularly in scenes with Ludacris as a socially conscious hacker) make portions of Gamer seem like a music video run amok.

Most damningly, for almost every intriguing idea or story strand Gamer sets forth - Castle trying to rig the system by releasing a non-controlled killer into Slayers, Simon being arrested for complicity in Kable’s escape, and a host of other twists thrown out and summarily discarded at a dizzying clip - Neveldine and Taylor offer up only halfhearted explorations. They seem bored by not only the themes but also any of the potential complexities of their own concept, addicted instead to pure motion.

Technical credits, from editing and cinematography to sound design, are all heavily treated, to match Neveldine and Taylor’s caffeinated aesthetic. And this doesn’t leave much room for memorable performances; consequently, Butler lets his jowly stubble take the lead.