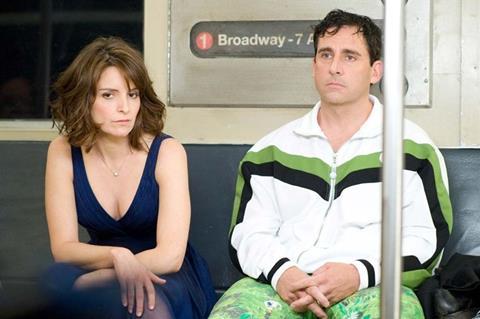 A promising concept and comedic pairing fall victim to sloppy filmmaking and a needlessly convoluted mystery plot in Date Night, a disappointing comedy that fails to fully deliver the indelible stamp of personality that makes either of its lead performers special. A streamlined marketing campaign and the likeability of its stars should ensure a solid opening weekend, but narratively this movie takes an early wrong turn from which it never fully recovers.

Steve Carell and Tina Fey costar as Phil and Claire Foster, a white-collar couple from suburban New Jersey who, seeking to jumpstart their marriage, leave the kids with a babysitter and impulsively trip to Manhattan for an evening. After poaching a table reservation at a crowded upscale restaurant, Phil and Claire are mistaken for a pair of blackmailers, and get sucked into a wildly escalating caper involving a stolen computer flash drive, crooked cops and incriminating photos of a politician.

Despite his impressive commercial pedigree, Shawn Levy (Night at the Museum) is a relative cipher as a director, and more than a decade into his career his movies continue to be plagued by basic coverage match issues. Poor framing and editing choices mar Date Night throughout.

But screenwriter Josh Klausner, working from an idea hatched by producer-director Levy, creates a story far more complicated than necessary. Seeing Carell and Fey get sucked into a criminal mystery screams of backward engineering, geared to place them in as many air-quote outrageous situations as possible.

Like the 1999 remake of The Out-of-Towners, character motivation is repeatedly sacrificed for over-the-top slapstick action. When an overblown car chase set piece ends with two automobiles locked together, speeding and spinning through the New York City streets, the movie essentially becomes a live-action Tex Avery cartoon, and any semblance of emotional connection is irrevocably severed.

Of some note, James Franco and Mila Kunis also inject a streak of manic energy in their one shared scene as the real blackmailers for whom Phil and Claire are mistaken.