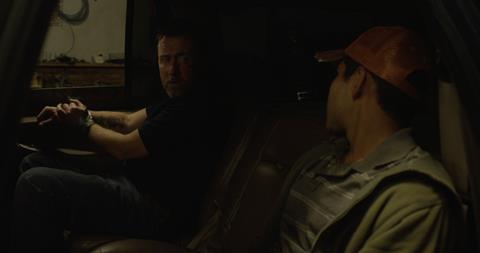 For his directorial debut, Gabriel Ripstein, the son of the celebrated Mexican director Arturo Ripstein and a former executive of Sony Pictures’ Mexican office, tries his hand in a variety of genres, ranging from youth delinquency through to organised crime, before settling into what is essentially a typical road movie.

A modest, unprepossessing production, shot almost entirely with a handheld camera, Ripstein’s direction shows little interest in the details of the plot, but is far more successful when underlining the unbearable ease of acquiring arms in any American shop and taking them over the border to Mexico.

If the script isn’t always as neat as one would expect at least the result is satisfactory, thanks to the authoritative presence of Tim Roth (one of the film’s executive producers) as an American federal agent tracking arms traffickers, and of upcoming young talent Kristyan Ferrer as an adolescent apprentice in crime, whose conduct alternates between Travis Bickle braggadocio - when he is alone in front of a mirror - and sniveling terror when he is faced with real life.

Driving vans packed to the gills with weapons from the US to Mexico for one of the countless minor family crime cartels, Arnulfo Rubio (Ferrer) already sees himself a full fledged gangster. He has a cool American partner of his own age who buys the stuff across the counter in any shop just north of the border. He looks innocent enough not to be checked at the customs every time he comes back from yet another “visit with my uncle”, but he is certainly not smart or experienced enough to notice an American agent, Hank Harris (Roth), on his tracks.

In an incredibly inept attempt to arrest Rubio, Harris is mugged and in an equally incredible decision, the terrified Rubio - despite being afraid of his own shadow - decides to take Harris prisoner and take him as a gift to his godfather south of the border. On the way, the two of them show signs of bonding, particularly when they have to cross the territory of another Mexican gang, before Rubio realises his gift isn’t appreciated by his bosses. Plus it is suggested that Harris may have engineered the capture himself to try and work his way into enemy territory.

A modest, unprepossessing production, shot almost entirely with a handheld camera, Ripstein’s direction shows little interest in the details of the plot, but is far more successful when underlining the unbearable ease of acquiring arms in any American shop and taking them over the border to Mexico, while at the same time implying the close relations between Mexican crime and their law enforcement system.

Demystifying both the image and the plot to the extent that he drains good guys and bad guys alike of any glamour whatsoever, Ripstein has Harris as one of the plainest secret agents around. Much more like a family man who does his gory job before going home to have breakfast with his family, while Ferrer’s Rubio seems closer to ridicule than he is to the confident portrait of heroism he tries to project.