A Liar And A Broken Girl 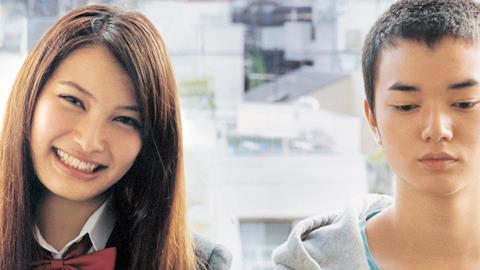 Teen romance, child kidnapping, brutal torture and a serial killer are the unusual blend of elements in Natsuki Seta’s adaptation of the popular Japanese ‘light novel’ series A Liar And A Broken Girl, with the film driven impressively by strong performances by the young leads Aya Omasa and Shota Sometani.

There is at least a smart twist at the end as the serial killer storyline is resolved in a satisfactory manner.

The film, which screened at the Tokyo International Film Festival, is a glossily odd blend of bloodshed and romance, and while at times the balance of styles is just not quite right; there is lot to admire in the sheer style of the film. It could be an interesting acquisition for DVD companies specialising in genre material.

The film opens with news of a fourth brutal murder of a young woman and an alternate story about the kidnapping of two young children. Genial schoolgirl Ma-chan (Omasa) returns to her plush apartment, but is followed by compulsive liar Mi-kun (Sometani) who pushes his way into her flat.

The two of them were kidnapped as children and haven’t met for 10 years. Both are emotionally and psychologically damaged, with Ma-chan keeping the two kidnapped children tied up in her back room and Mi-kun lying to all around him. They form an oddball family, with Ma-chan veering between rages and affection and Mi-kun turning the camera whenever he tells a lie.

As their story develops there are also flashbacks to their time together as kidnapped children. She is tortured and forced to kill her own parents, with the younger Mi-kun her only sense of solace and salvation. Even the adults they are forced to deal with – their longtime doctor (Kyoka Suzuki) and the policewoman tracking the killer (Natsuki Kamiyashiro) – are presented as oddball children.

It all gets a little confusing and overly complex – though admittedly in an engagingly dark and disturbing style – but there is at least a smart twist at the end as the serial killer storyline is resolved in a satisfactory manner.