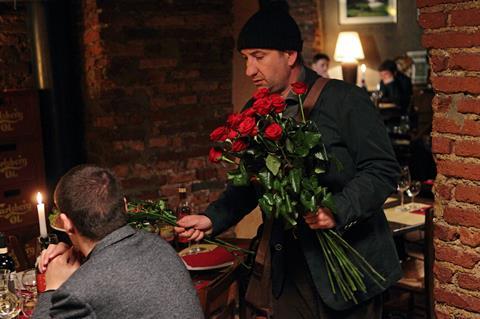 Though introduced by the media, prior to its release, as Gianni Amelio’s first comedy, this bleak portrait of Italy, as it looks these days, has very few smiles spread through it, and every single one of them is accompanied by deep sighs, a reminder that there are really no laughing matters in A Lonely Hero (L’intrepido).

Antonio is Gianni Amelio’s version of your average, nice, honest, pleasant Italian. Good at heart, kind to others, incurably optimistic…a man who can do most things but doesn’t particularly excel in any of them.

Relying to a great extent on the presence of Italian superstar Antonio Albanese playing a middle-aged Italian who keeps himself busy from morning to night replacing others at their work and aspires to do nothing more than that, the script offers plenty of material for thought but never manages to tie it all up into a distinct plot leading anywhere. More concerned with re-enforcing its arguments than using them to move ahead, the film, just like its hero, seems quite pleased to stay in one place all through.

Antonio Pane (Albanese) has trained to be a teacher but he doesn’t hold any job whatsoever. Instead, he fills in for anyone that needs to absent himself from his regular occupation, and even before the credits start to roll, he manages to climb on the scaffolds of a building site, wear a lion’s suit in an amusement park and drive a tram.

Later in the course of the film, he is a cook, delivers pizza, works in a laundry, sells shoes, cleans in a fish market, massages feet, even pushes a wagonload of coal in an Albanian mine. When asked about his other temporary employment work, he rates coffin cleaning and pest control as the worst he ever had and arranging books in a library as the best.

Antonio is Gianni Amelio’s version of your average, nice, honest, pleasant Italian. Good at heart, kind to others, incurably optimistic…a man who can do most things but doesn’t particularly excel in any of them.  What singles him out is his utter loneliness, out of which he doesn’t seem too eager to escape. He was married, but his wife, Adriana (Ceccarelli), evidently expected more from life than he could offer and found a better provider for herself. But when she puts in a late appearance, she still seems to be as concerned about Antonio’s fate as she was during their life together.

He has a son, Ivo (Rendina), a divine saxophonist suffering from acute bouts of panic, and at one point he befriends a mysterious, emotionally unstable, young woman Lucia (Rossi), who he tries to help out in a relationship that starts as friendship and could have developed into something more, given the chance.

There are references to unemployment and corruption on every level, unambitious complacency plaguing many of the older generation, confusion and uncertainty characterising the younger one and an unbridgeable generation gap between the two of them.

You can’t dislike Antonio in everything he does. He is certainly a good soul, but his passive acceptance of an insecure existence that makes sense only in a fairytale doesn’t qualify him as the best friend you’d like to have. His insistence to remain afloat in a society requiring solid anchors deprives the film of anything more than best intentions.

Amelio, who evidently won’t take things lightly, is probably not the best choice for a return to the good old days of the commedia al’italiana. Using a melodramatic approach and quite a few clichés (suicidal daughters of the high bourgeoisie are not exactly a novelty), his static image of a stagnant Italy may be correct - as far as it goes - but its ending, which suggests things can go on forever this way, will no doubt raise quite a few protests.  Luca Bigazzi’s camera wraps Milan in the same kind of melancholy mood that prevails all through the film while an inspired sax interpretation of Nat King Cole’s Nature Boy spreads just the right kind of bluesy atmosphere over the proceedings.

Screenplay: Gianni Amelio, Davide Lantieri, based on story by Amelio