A Monkey On My Shoulder 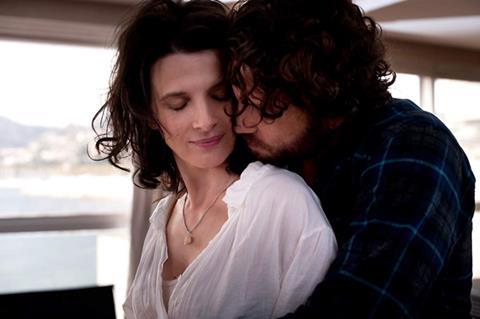 Intense, earnest and perilously close to over-the-top, A Monkey On My Shoulder (A Coeur Ouvert) is a frustratingly uneven Days of Wine and Roses meets open heart surgery. Juliette Binoche and Edgar Ramirez (Carlos) deliver feral, unbridled performances as lusty, playful husband-and-wife heart surgeons who specialize in transplants although he’s a hopeless alcoholic.

Dream-like sequences in the final stretch have visual oomph but feel closer to a cop-out than a gutsy narrative solution.

At first the melodrama holds together reasonably well even though the tug of Love and Death is laid on with a trowel. But as their buoyant relationship deteriorates, one does want to shout at the screen: “Physicans! Heal thyselves!”

One of at least 10 films in the French release schedule this summer that happens to have been scripted and directed by a French woman, Marion Laine’s sophomore feature is watchable but not satisfying.

“We eat too much, drink too much, screw too much and don’t get enough exercise,” says Mila (Binoche). She and Javier (Ramirez) are heart surgeons by day, renegade skinny dippers by night. When they’re not doing transplants (several docu-style close-ups are not for the squeamish), they’re cavorting like teenagers despite a decade of marriage. They’re truly, madly, deeply smitten and can’t keep their hands off each other.

Mila - who, like many a heart surgeon, has a monkey tattooed astride one ear - is unconditionally in love. No words or actions, however harsh, can dent her deep-seated complicity with Javier for long. As his alcohol habit eats away at his judgment centers, Javier is increasingly prone to jealous, possessive and irresponsible imaginings.

Although he’s as brilliant as ever - he’s the one who set up the transplant unit - and his hands are still steady, co-workers file complaints. Javier is banned from operating, which gives him more time to drink.

Like many medical specialists, Mila seems to have forgotten where babies come from. When she offhandedly complains to the staffgynecologist that she’s been plagued by nausea, the lady doc asks “Have you been taking the pills I prescribed?”  “Most of the time,” says Mila.

Mila schedules an abortion. She and Javier never wanted kids to disrupt their carnal idyll. But Javier now wants the child - or thinks he does. Wearing rose-coloured blinkers, Mila is prepared to make radical sacrifices to boost her beloved’s fragile self-esteem.

Laine was keen to work with Ramirez and it was he who suggested Binoche. Are they convincing as eternal lovebirds? Yes. As heart surgeons? Not really, although both leads are conscientiously acting up a storm while endeavouring to dodge overly spelled out symbolism.

Mila’s attitude toward her accidental pregnancy is one of the more original aspects of the tale.  She sees her condition as a mistake to be rectified pronto. Although she saves lives for a living, she couldn’t care less about creating a dependent life form of her own. Dream-like sequences in the final stretch have visual oomph but feel closer to a cop-out than a gutsy narrative solution.

Screenplay: Marion Laine, based on the novel Remonter l’Orenoque by Mathias Enard