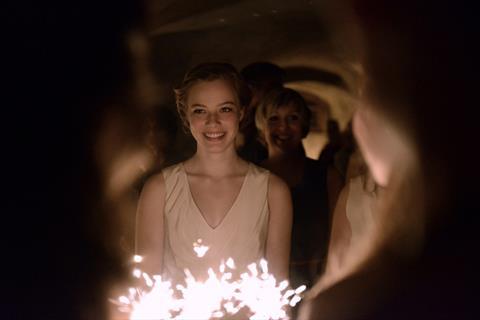 If it’s true that revenge is a dish best eaten cold, the machinations are satisfyingly sub-zero in A Pact (Pour ton anniversaire) a delectably unnerving German-language tale from French writer-director Denis Dercourt (The Page Turner).

Dercourt, who openly admires the work of Michael Haneke and the expressionist cadences of the East German theater tradition, conjures his own brand of implacable minimalism.

It is a mannered yarn spun from sinister motivations is diabolical in a way that probably wouldn’t work in real life but that lends itself beautifully to a hermetic movie universe. The cast of high-profile actors are consistently fun to watch and the perfectly integrated score keeps the mood edgy from first frame to last.

The film’s first ten minutes are set in East Germany in the mid-1980s. The three protagonists, Anna, her boyfriend Georg and their friend Paul are age 16. In fact, it’s Paul’s 16th birthday. (The film’s French title Pour ton anniversaire and the German title Zum Geburtstag mean ‘For your birthday’ and “Happy birthday.”)

Paul is secretly in love with Anna. Deploying a simple but effective ruse, Paul prompts Georg to decide to hand over Anna but with the understanding that should Georg want her back some day, Anna must revert to him. Georg adds the odd proviso that Anna must be “unchanged.”

Making a birthday present of your sweetheart without consulting her (Anna is out of earshot while the guys negotiate) sounds creepy and sexist, but the arrangement makes sense under the misleading circumstances cooked up by Paul. Georg consoles himself with a punkish young woman he lures to his motorcycle and that’s that.

The action then advances to “Many years later in another part of Germany.” Paul (Mark Waschke) and Anna (Marie Baumer) are still a couple and have obviously done well for themselves in reunited Germany.  He has a good job in a bank, she works in a medical lab and they have a pretty teen daughter, Emelie (Saskia Rosendahl) and a handsome son.

Paul’s brand new boss at work turns out to be none other than Georg (Sylvester Groth). While Georg certainly remembers his old classmate, he seems to have no memory of the pact he laid out decades earlier.  He, in turn, lives with Yvonne (Sophie Rois), the punk girl he rode off with that day on the beach years before the fall of the Berlin Wall.

The same day Georg and Paul get reacquainted, fake but compromising photos surface and Paul confides in Daniel (Johannes Zeiler), the bank’s head of security, that somebody is clearly out to get him. So, what gives? Does Georg intend to reclaim Anna (who knows nothing of the real circumstances that made Georg leave her in the lurch)?

The two couples join a weekend hunting party made up of people who may have grudges as well as guns. Characters speak with precision but situations remain suspended and ambiguous. As a result, the engaged viewer’s brain scans the proceedings for reliable clues.What’s really going on coalesces ever so slowly as the stakes are ratcheted up for Paul’s whole family.

Dercourt, who openly admires the work of Michael Haneke and the expressionist cadences of the East German theater tradition, conjures his own brand of implacable minimalism.  He also prizes economy in storytelling as the running time - a mere 83 minutes - indicates. Be advised that each minute is tense.