A Place In Heaven 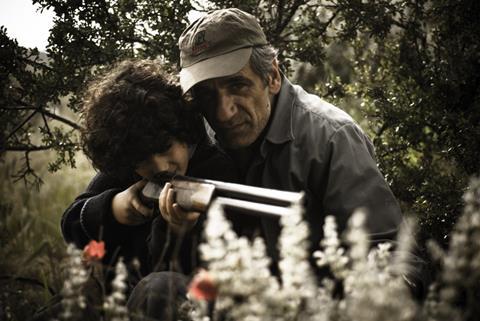 Two years Josef Madmony walked away with the top Karlovy Vary award for his previous film, Restoration.  Now he is back for an encore, expanding the scope of his new film to no less than 40 years in the life of an Israeli Army chieftain, thus covering large parts and several crucial aspects of the admittedly short but exceedingly eventful history of the State of Israel.

There are enough themes and motives here to provide sufficient material for several feature films.

A composite picture inspired by several of the better known and more controversial real-life generals whose military and later political records are still much debated, A Place In Heaven (Makom be-Gan Eden) will most probably generate, both at home and abroad. His efforts to penetrate beyond the historical milestones and personal references are commendable at all times, particularly in presenting a certain prototype of the Israeli secular and anti-religious Zionist that fits many of the country’s past and present leaders.

But the vast perspective he is reaching for in his film might have been better served by a larger format that would allow him to devote more time and develop all the significant incidents and the various characters he crams into his two hours.

Starting at the end - with the assassination of his hero, Bambi (Alon Aboutboul) - Madmony jumps back to the early days of the State, when fedayoun (Palestine refugee fighters) attacks on Israeli soil drew equally ferocious responses from the Israeli army, which sent special units into bloody incursions across the borders.

Bambi, a deceptively innocent nickname for a natural-born warrior, is the fierce, ruthless commander of such a unit, famous for his dedication to his soldiers, his unscrupulous fearlessness and his single-minded determination to always get his way. Whether it is to wed Ayala (Rotem Zisman-Cohen), the daughter of an observant Yemenite immigrant, to have her give him a son even though she risks dying in childbirth, to win every battle he undertakes - even if it costs the life of a soldier he had saved a few hours earlier - he would never concede himself beaten and never compromise his principles, as thwarted as they may be.

And when, as a general, he fails to take the final step to supreme command because he had infringed in past military ethics, he starts a political career that turns out to be even more successful than his military one. But then comes the point when his only son, Nimrod (Tom Graziani), turns his back on him after he had replaced his mother with a non-Jewish mail bride and enters a religious school, spurning all of his father’s expectations that he would follow in his path.

There are enough themes and motives here to provide sufficient material for several feature films, be it the conflict between the religious and the secular, the generational gap, the complicated Ashkenazi-Sephardi relations, even Holocaust memories are thrown in at the last moment, not to mention the tremendous impact on the country’s political life that former military figures, even those temporarily dishonoured, have had in the past and still do now.

Madmony touches most of these topics and more, but can never afford the luxury of going deeper into any of them for lack of time. He hints at many questionable features his protagonist might have, but is careful enough not to stress them, avoiding almost entirely the political aspect of his career, with just enough of a shadow to raise questions but not provide answers.

With the help of Alon Aboutboul’s dedicated performance, which supports the entire picture, he manages to create a character that despite all his drawbacks is more sympathetic than he may deserve to be. Quite a few touching, wistful moments, are sprinkled along the road, leading to the final encounter between Aboutboul and Yossi Pollak (subtly playing an old man who had long ago acquired Bambi’s place in heaven for a month of hot-spiced delicacies) walking side by side towards the final exit.

Preferring to shoot most scenes at close range, Madmony allows some sequences to go, under the circumstances, beyond their necessary length, such as the depiction of the year Bambi works his father-in-law’s land which is much more detailed than all of the twenty years he dedicated to public life. Maybe, sometime in the future, Madmony himself may consider filling up the missing blanks, but for that he would need a full scale TV series.