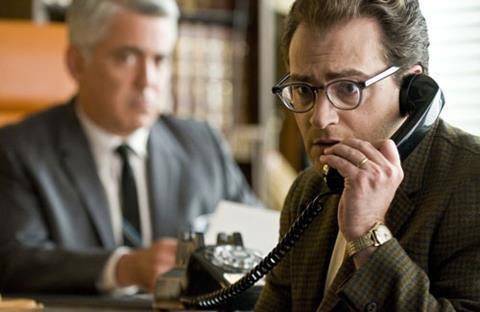 A unique alchemy seems to take hold on those sporadic occasions when the Coen brothers decide to get down with their ethnic roots. 18 years after mining the Jewish auteur subculture of 40s Hollywood for their now-classic Barton Fink,  the prolific duo deconstruct the Jewish suburban community of their youth with an astringent emotional and atmospheric specificity, producing a frequently inspired and always vigorously felt dark comedy that ranks with their finest.

Having gone the movie star route for their last effort, Burn After Reading, the Coens have assembled a stage-savvy cast for A Serious Man, showcasing their considerable gifts with a pungently witty script that would not be out of place in a live theatrical setting.  Given the high collaborative payoff, the lack of A-list names should do little to deter serious audiences from seeking out the film and much to attract favour during awards season.

The earnest figure of the Coens’ title is Larry Gopnik (Stuhlbarg), a midwestern physics professor whose model, middle-class-in-the-‘60s life is splitting at its meticulously tailored seams. His wife Judith (Lennick) has announced her intentions to divorce him to marry family friend Sy Ableman (a drolly unctuous Melamed), a widower who speaks with the empathetic cadences of a shrink and operates with the impulses of a snake.

Larry’s bar mitzvah-age son Danny (Aaron Wolff), a reluctant student at Hebrew school, is covertly racking up huge debt for his father with record-club purchases, while his live-in brother Arthur (Kind) harrasses the family with his health needs.

Ill winds blow from outside the Gopnik household as well in the persons of a goyish, alpha-male neighbor who is incrementally encroaching on Larry’s property and a Korean student of Larry’s who is less than subtle in his efforts to extort a passing grade. They pointedly embody the threat of the other as experienced by the film’s protagonist, who has cultivated around himself a hermetically sealed lifestyle reinforced by a good Jewish attorney (Arkin) and an extended hierarchy of rabbis whose anecdotal wisdom is as ineffectual as it is generous.

Stuhlbarg externalises Larry’s churning anxieties with a priceless array of deer-in-the-headlights masks that seem to take their cue from the dead elk his neighbour drags home from a hunting trip. The Coens set up his character along with the film’s mordant tone via a life-on-the-shtetl prelude in which a Polish-Jewish couple receive a ominous visitation from a dybbuk. One initially concludes that the dead-man’s curse has been passed along to Larry from his ancestors. But there’s also a clear impression that all of the folks in Larry’s immediate universe are suffering in a shadow cast by their forefathers, a point that is reinforced eloquently in the Old World-inflected interiors of designer Jess Gonchor and the lighting of the Coen’s redoubtable cameraman, Roger Deakins.