A Shout From Within 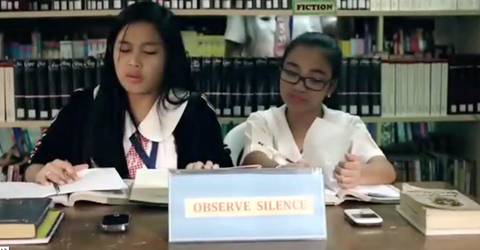 An engaging insight into the young Filipino community living in Doha, Jan Xavier Pacie’s A Shout From Within is a fascinating film for young people shot at the Philippine School in Doha and written and performed by young students from the school. The fact that this Doha-set film rarely indulges in simple background shots of the city makes it even more engaging – it is just an everyday tale of students at a school, and all the better for keeping it modest and grounded.

The themes of the stories are all quite familiar but they are all treated with equal dramatic focus with the story nicely tying together their various strands.

While at times with script is engagingly naïve and the performances can vary in tone, the film shows its ambition right from the start when it opens with an impressively sustained series of tracking shots that introduce many of the key students that the film’s story revolves around. A Shout From Within screened at the first Ajyal Youth Film Festival in Doha.

Divided into four chapters, the film is essentially a series of intertwined stories of a group of kids at the school who are trying to bond and share their schooldays in a country far away from their home and deal with growing up and becoming young adults at the same time.

The themes of the stories are all quite familiar – young love; a queen bee girl who wants to be leader of the cool pack; an overachiever who worries no-one sees her for who she really is; two sisters trying to get over the death of their mother, and a teen fresh from the Philippines who finds his father is having affair with the mother of another student – but they are all treated with equal dramatic focus with the story nicely tying together their various strands.

At the heart of most of the strands is sweet-natured Hannah (Joyce Sison), a well-meaning girl who worries people overlook her and also has to deal with her overly strict parents. Others who make an impact are Mardrin Quimba as new-boy in town Derek and Jaya San Jose as the beautiful girl who aims to gather the cool kids around her (in the great traditions of Mean Girls) but also has issues of her own.

This is a film with no great dramas (and sex never rears its ugly head) or passions, but it is engagingly innocent stuff that – given it was written largely by students of the school – strikes a chord with the young people there. The characters may be loosely drawn, but they tend to ring true and combine to make the film (which also screens under the title Hiyaw: A Shout From Within) gently watchable. It is likely also one of the first Qatar films likely to get a release in the Philippines.