A Stone’s Throw Away (A Tiro de Piedra) 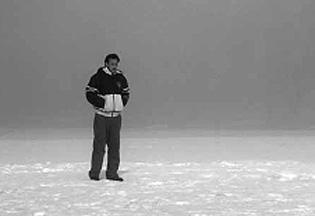 Understandably, films about citizens who cross illegally into the US have become something of a genre in Mexico, and quite a few documentaries have addressed the subject. One of the finest is this first feature by Hiriart, who wrote the screenplay with ubiquitous film actor and theatre director Rodriguez, who also plays the lead role as 21-year-old shepherd Jacinto Medina. The film won a Special Mention in the Horizontes section of the San Sebastian Film Festival, and is having its Mexican premiere at the Morelia International Film Festival.

The accessibility of dialogue will help its commercial prospects internationally, as will Hiriart’s bravura feel for landscapes.

Even though Jacinto speaks only Spanish, most of the film takes place north of the Rio Grande, so a majority of the people he meets on a journey to Oregon do talk - mostly at him - in English. The accessibility of dialogue will help its commercial prospects internationally, as will Hiriart’s bravura feel for landscapes (he does his own photography here and is a cinematographer for other projects), whether they be desert scrub, snowy mountain passes, verdant patches of land, downmarket sections of San Francisco, or the other America, small depopulated towns where diners serve as social hubs.

The overlay of this unique immigrant’s tale onto a road-movie template, with Rodriguez’s strong face reflecting the ups and downs of the trip, is an effective way of keeping the viewer in a state of intimate suspense. The film will find a limited theatrical life in Mexico but will certainly be a staple on the festival circuit and a draw for specialty distributors.

The narrative is elliptical. It begins with Jacinto being interrogated, presumably by immigration police, then flashes back to what could have been an idyllic life in beautiful fields with his goats, save for the always-present allure of a better life up north. After a vivid dream about discovering treasure, he stumbles upon a keychain with an address in a tiny mountain hamlet in Oregon and takes it as a sign of impending wealth awaiting him.

After crossing the desert, he is robbed by fellow Latinos and punched by white American teens. Once he reaches his destination - Hiriart shoots the overwhelming whiteness with almost no sound, the effect itself is chilling - things are hardly as he expected them to be. They get nasty, and his quiet life in Mexico suddenly seems the best option.