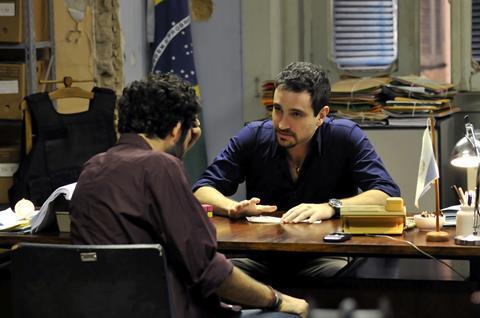 Stylishly bloody Brazilian crime-drama AE-Autoexposure (Disparos), which had its world premiere at the Rio Film Festival, has the genre style to appeal to smart distributors, and while perhaps too niche to fully break-out it is made with real skill and pace.

It is a film strong on drab interiors rather than sun-drenched beaches, with writer/director Reis showing a strong control of the multi-strand format that allows each character to develop nicely.

The debut feature from Juliana Reis (a former casting director for Luc Besson), the film may well suffer from a title that will hardly inspire excitement and expectation but its nice balance of genre thrills and dark humour sets it apart from the usual crime drama structure.

Photographer Henrique (Gustavo Machado) has his camera images stolen in an attempted carjacking that escalates into a full-on traffic accident. One of the would-be thieves is seriously injured in the incident, and while Henrique initially runs from the crash he later returns to look for his camera memory card, but is arrested for leaving the crime scene.

While in custody Henrique is interrogated by detective Inspector Friere (Caco Ciocler) who tries to decide whether he is victim or villain. At the same time one the criminals is seriously injured in hospital…amusingly Friere even interrogates the wrong patient as a potential suspect.

The aftermath of the robbery and subsequent game-playing around the interrogations allows AE-Autoexposure to tackle contemporary Rio from an unexpected and unusual viewpoint – it details social behaviour rather than beautiful vistas and old-fashioned drive-by robbery rather than gun-and-drug battles. It is a film strong on drab interiors rather than sun-drenched beaches, with writer/director Reis showing a strong control of the multi-strand format that allows each character to develop nicely.