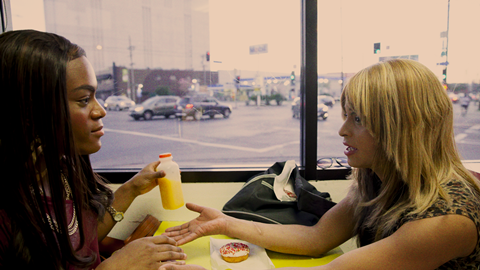 Tangerine star Mya Taylor is developing a TV series based on her transition.

Taylor is believed to be the first trans actress to be put forward for Oscar consideration for her performance in Sean Baker’s innovative Sundance hit, which Magnolia and backers the Duplass brothers are hopeful can connect with academy voters.

Taylor revealed the TV project in an interview about Tangerine due to run in Screen tomorrow.

“My experience was actually way more dramatic than that of the characters in Tangerine,” said Taylor.

“I would be interested to portray that journey. I’m trying to get a TV series started about it. It will cover the struggle pre transition, during transition and after. I have team working on it and I would be an exec producer.”

Meanwhile Tangerine director Sean Baker is looking to change tack on his next project.

“I am looking at making a film down in Florida, a kids story that will hopefully have a bigger budget,” the director revealed.

Baker is set to reunite with many of the same behind-the-camera team as Tangerine and his previous work.

Comedy-drama Tangerine, shot for only $100 on an i-phone, charts the story of a trans prostitute who tears through Tinseltown on Christmas Eve searching for the pimp who broke her heart.

Magnolia clocked a number of international deals on the festival favourite, which took $700k in the US following its July release. Metrodome releases in the UK on November 13.