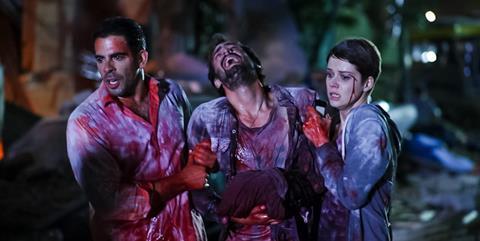 The earthquake’s tremors may knock down buildings, walls and statues, but the actual shocks in this indie disaster-horror hybrid are few and far between. Produced, co-written and co-starring Eli Roth, Aftershock follows in the bloodstained footsteps of the American actor-director’s forays into the horror genre (Hostel, Cabin Fever). But here, Chilean director López adds a natural disaster—the 2010 Chilean earthquake—to the mix of severed body parts, mutilated bodies, and sordid bad-guys, who are prone to rape, kill and torture at whim.

In the midst of bad men doing bad things (often against attractive women), Aftershock also has a strangely moralistic undercurrent about abortion.

Roth’s fan-base, and plenty of marketable sequences of death, destruction and sexy Latin American women, will ensure a certain amount of business for Aftershock. And López has an adequate Hollywood calling card on his hands. But the film is less about aftershocks than just plain shlocky.

For the first 30 minutes, audiences must endure Roth’s Jewish “Gringo” tourist trying to get laid at various Chilean strobe-lit dance clubs, along with two locals, Ariel (Ariel Levy) recently broken up and also looking to get lucky, and Pollo (Nicolás Martínez), a chubby rich joker who takes pictures of his testicles and shows everyone a good time.

The fun-loving trio soon inexplicably hooks up with three beauties, Russian model Irina (Natasha Yarovenko), party girl Kylie (Lorenza Izzo, a great screamer) and her Hungarian overprotective half-sister Monica (Andrea Osvárt), who agree to accompany them on a trip to the coastal town of Valparaíso for another blowout dance party.

Finally, the quake comes – not soon enough – and one by one, each of the six young partiers meets their hideous doom, along with dozens of others. For this type of crasher/slasher picture, you might expect more creative and gruesome deaths—Roth, being the most recognizable star, faces the grisliest fate—but many of the killing are uninspired; some characters simply get shot, and what’s the fun in that?

Sometimes, death is funny—as when a cleaning lady’s head gets run over by a passing car; sometimes, death brings tears to the character’s eyes. The tonal shifts don’t cohere; it’s both over-serious and not silly enough. Are viewers supposed to be appalled by a brutal rape, then delighted by the hapless way that the incapacitated Gringo tries to retaliate with a feeble tossing of a rock at the rapist? Apparently so.

And making light of the Chilean earthquake, which killed 300 people and displaced over a million more, may not weigh on the minds of horror fans, but it could prove distasteful for other audiences.

Indeed, while the earthquake’s ripples provide a few surprising plot turns, taking place at just the right moment in order to trap someone or topple something, the film’s suspense is built more around the small crazed mob of escaped convicts tearing through town and chasing the protagonists. This makes the movie less about the titular earthquake and a much more conventional journey of unrepentant evil vs. a band of regular folks (admittedly, with one twist).

In the midst of bad men doing bad things (often against attractive women), Aftershock also has a strangely moralistic undercurrent about abortion. The appearance of dead fetuses—clearly meant for some semblance of shock value—doesn’t fit well with the hedonistic nature of the rest of film. Perhaps that’s the clichéd point: All the unpleasantness that befalls the characters is meant as some divine retribution for their hard-partying ways. Or maybe, more likely, there is no point.