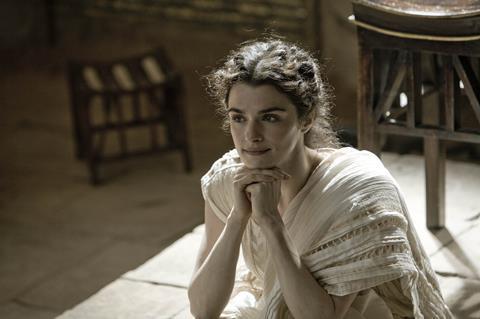 Christianity gets a bad rap in Alejandro Amenabar’s Agora, a historical epic in which the early church is shown violently oppressing other faiths, science and women in its bid for political power. An enormously ambitious attempt to recreate the conflicts of 4th century Alexandria, many of which are still raging today, Agora ultimately fails to hang together narratively and does not engage on the same grand emotional level as the sword and sandal epics of old – Quo Vadis? Ben-Hur et al – which it is clearly trying to reinvent.

It’s a bold story to tell at a time when the Catholic Church still has the power to rally its propaganda machine against negative onscreen representations. However Amenabar falls into some easy traps of the genre. Like Oliver Stone with Alexander in 2004, he falters with accents, and the choice to lead with upper-crust English here - alongside a smorgasbord of European - lends a faintly ridiculous whiff to much of the dialogue. An unconsummated love triangle generates much chest-heaving and longing looks but little passion, while the focus on early scientific thought is a little too dense and might prove a turn-off for wider audiences.

The undoubted spectacle and bloody massacres in the film should raise some interest in the teenage male demographic, but youngsters are not the core audience and in any case would not have the staying power for its 141 minute running time. Upscale adults might be more intrigued by the prospect of a film which is intelligent in design, if flawed in execution. International audiences which responded more favourably to Alexander, Troy and 300 could be more receptive to Agora than domestic.

The film rests on the shoulders of Rachel Weisz, an undoubtedly talented actress but one with a distinctly contemporary edge that feels out of place here. She plays Hypatia, a brilliant astronomer living within the rarefied walls of the legendary Library of Alexandria who teaches both pagans and Christians theories of the sun and the stars and where earth fits into the universe.

The story starts in 369AD as tensions in the city market area (“agora”) between polytheistic Pagans and Jesus-worshipping Christians have reached new highs. The director of the library Theon (Lonsdale) is hoping to hand over control to his daughter Hypatia, but the religious leaders of the city are reluctant to let a woman take over in such a volatile religious climate.

Indeed it is the religious leaders who incite an attack on the Christians as they gather in the agora to hurl abuse at the pagan gods. The massacre leaves many Christians dead but the pagans underestimate the Christian numbers, they are overcome and barricade themselves into the library compound.

Hypatia is among those trapped inside with her pupil Orestes (Isaac) and slave Davus (Minghella) both of whom are in love with her. But the three are torn apart when the openly Christian Roman emperor Valentinian decrees that the pagans must surrender the Library to the Christians, who proceed to sack it. Davus, who has been inspired by the tenets of Christianity, stays behind with the Christians, leaving Hypatia and Orestes to flee.

If this were 1951, Amenabar could have inserted an intermission at this point in the story since he then moves the plot forward several years. Orestes is now the prefect of the region and a Christian convert, Hypatia lives in Alexandria unhampered in her astronomical research and Davus has joined the Christian city militia the
Parabolani.

But more trouble is ahead. Under the tyrannical leadership of the bishop Cyril (Sammy Samir), the Christians start to wage war on the Jewish population of Alexandria, stoning them during a music performance on the Sabbath and launching a full-scale massacre after the Jews retaliate.

Meanwhile Hypatia, who is close to making a breakthrough in her theories about the universe, is the next target for the Christians as Cyril has her declared unclean and a sorceress, causing the Prefect and the Parabalanus to choose between their church and the woman they love.

The film’s production design and sets are top-notch and Amenabar seems pleased with his recreation, displaying his lavish cityscapes repeatedly. The characters are not so well-drawn, however.

Hypatia has a vicious temper tantrum with Davus which is wildly out of character, while Davus’ inner conflict is muddily written to say the least. Minghella and Isaac both display ample charisma, although there’s no disguising the fact that Weisz is centre stage.

Perhaps, as Alexander and Troy proved, contemporary filmgoers are unable to accept their movie stars in togas as they were 50 years ago. 300 told its tale in a sufficiently-stylised manner to avoid too much ridicule, while Mel Gibson has the best idea of all, using a dead language to play out his drama in The Passion Of The Christ.