Ali Mostafa, From A To B

INTERVIEW: Abu Dhabi Film Festival opener to hit the AFM next month and will also screen at the upcoming Cairo International Film Festival. 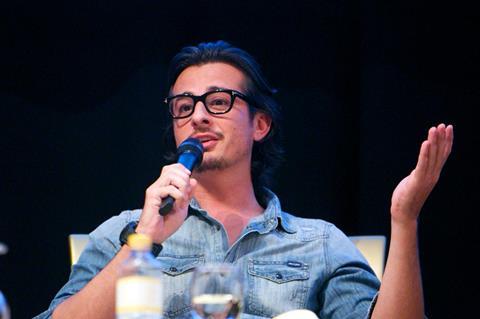 Stopping off at a Saudi police station, the magnificent ruins of Petra in Jordan and a bombed out Syrian town, Emirati filmmaker Ali Mostafa’s pan-Arab odyssey From A to B makes for an unconventional road movie.

The British-born Emirati director took to the stage at the festival on Friday to talk about the making of the picture, co-financed by Abu Dhabi’s media group twofour54 and Image Nation, alongside creative producers Egyptian Mohamed Hefzy and Lebanese Paul Baboudjian.

The dramedy, which opened the Abu Dhabi Film Festival on Thursday, follows three former high school pals – an Emirati, an Egyptian and a Syrian — who travel from Abu Dhabi to Beirut to visit the grave of a late friend in 2011, some five years after his death in an air raid over the city.

“I’ve always been interested in road movies and I thought it would be interesting to do one in an Arab region,” said Mostafa.

“After setting my first film in Dubai, I was keen to do something in the Emirati capital of Abu Dhabi, so that became my starting point, and I thought a neat route would be to end in Beirut, a place which is also very dear to me. As well as being very beautiful it’s also a fun city.

“The route, taking in Saudi Arabia, Jordan, Syria and then Lebanon, is very varied geographically as well as culturally and I thought this would make for something quite exciting.”

Having secured development funding from the Abu Dhabi Media Authority twofour54, Mostafa hooked up with Hefzy, founder of Cairo-based Film Clinic, and Baboudjian of the Screen Institute Beirut, early on in the project.

“Because I wanted the film to be pan-Arab, Mohamed was a perfect fit, especially given his strong connections in Egypt,” said Mostafa.

Hefzy, who has a scriptwriting as well as producing background, not only brought in Egyptian writers Ashraf Hamdi and popular comedian and writer Ronnie Khalil to help Mostafa with the script but also gave the final manuscript a polish himself.

He also helped with the casting of Egyptian actor Shadi Al Fons as co-lead Rami, a mummy’s boy who pretends he has gone for a job interview in Bahrain rather than reveal his true destination.

While focusing primarily on the production side, Baboudjian also contributed to the script. A scene in which the friends are confronted by a group of Syrian soldiers is based on his experiences in Lebanon years previously.

In the meantime, twofour54 committed to finance 50% of the $2m budget and Image Nation came on board too. Mostafa and Baboudjian also sourced part of the budget through tie-ups with brands including Range Rover and Nescafé.

“I think it’s the first time Nescafé has done a product placement deal with any film anywhere in the world,” said Baboudjian, who worked closely with Mostafa on the financing and production side.

By setting the story in 2011, Mostafa avoided much of the complex geopolitical events to have hit the region in the past 12 months linked to the escalation of the Syrian civil war.

The film still touches, however, on the Syrian conflict through a confrontation with pro-Bashir Assad soldiers as well as a scene in which the friends are held by gun-toting rebels while passing through the province of Daraa in the south of the country.

“The situation now is totally different to what it was when we were shooting the film and the time when the film is set. I wouldn’t attempt the same thing against today’s backdrop. But it would have been impossible for them to cross the border from Jordan into Lebanon without seeing what was going on,” said the director, revealing that the Syrian scenes were actually shot in Jordan.

Interestingly, Mostafa pushes the envelope for the region with the film’s approach to alcohol, pre-marital sex and dress codes. He says, however, it was neither his aim to shock or avoid the censors while writing the script.

Judging by the audience’s response to the film on the opening night, few of the local attendees were fazed by the cultural pitch of the film.

“You felt it in the room. The audience obviously enjoyed the film. You can’t please everyone.  I love film. I want to make the best films I can make and I want to able to talk about things without worrying about censorship so I don’t want to go all out but what’s important is that we start to surface certain subjects,” said Mostafa.

The picture will hit theatres in the region on January 1, 2015, where Dubai-based pan-Arab distributor Empire is handling its release.

Ross said Image Nation was now in talks with a US sales company to launch the film on the international market at the AFM next month although other non-US parties are also said to be interested in the picture too.