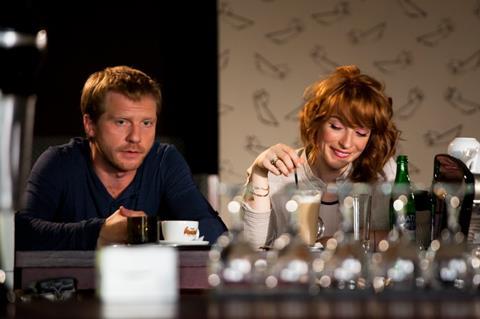 Rudolf Havlik’s debut feature, a feather lightweight comic road movie about a young, over-confident wheeler-dealer who tries to bite more than he can chew, never dares to stir away from trodden paths nor does it attempt anything that has not been done before, at least once.

There is nothing deep or meaningful Batek has to deliver in his role, most of his efforts in this department are restricted to the off-screen speeches.

Unveiled outside the competition in Karlovy Vary, and hindered by a rickety script, masses of tired clichés and cutesy performances, its audience at home will depend on the appeal of stage and soap-opera star Pavel Batek, but any chance of All My Tomorrows (Zejtra naporad) crossing the borders is  minimal.

Petr (Batek), a presentable young man who will sell anything to anybody, buys merchandise cheaply in the Far East and sells it with a profit at home. His time is divided between these two poles, and the instability of his life fits in perfectly with his temper.

He hates commitments, likes living on the edge and has only two friends: Pavel (Filip Blazek) who always pulls him out of any trouble he might find himself in, and Tereza (Vica Kerekes), a high-strung, red-headed girl who pretends to be just a pal but is of course desperately in love with him, as any viewer will notice the first time they meet.

When a shipment of T-shirts turns out wrong, Petr gets into his car and runs away until things cool down, going on a tour around the country to meet the blind dates which he had arranged through the internet.

There’s a luscious blonde in a tight red dress jumping into bed with Petr only to claim, post factum, that she never does such things, she’s always been faithful to her boyfriend. Next there is a gay hitchhiker with a chainsaw followed by a girl who seems to be a lot of fun until her lover arrives with re-enforcements, to wait for her.

Later, Petr agrees to pick up Tereza’s uncle and take him to a wedding, despite being (falsely) warned his passenger is a kleptomaniac. There is a chase on foot through the streets of Prague and a car chase at night, a thug beats the hell out of him, but just in case anyone worries, love will win in the end.

Worn down by a lot of voice-over monologues which allow Petr to expound his personal philosophy, there is nothing in the situations or the characters except the whims of the writers to justify the script advancing from one stage to the next. All locations are pleasant to the eye and Vaclav Tlapak’s camera makes the best of them. On the other hand, the editing tries to bridge, unsuccessfully, over gaps in the script, but simply ignoring them is not a solution.

There is nothing deep or meaningful Batek has to deliver in his role, most of his efforts in this department are restricted to the off-screen speeches, while Vica (also known as Eva) Kerekes is presented with an inconsistent part that allows her a tantrum every once in a while, but not much more. As for the Hong Kong locations, they look suspiciously like stock shots planted in the film to throw in a bit of exotic flavor. They don’t.