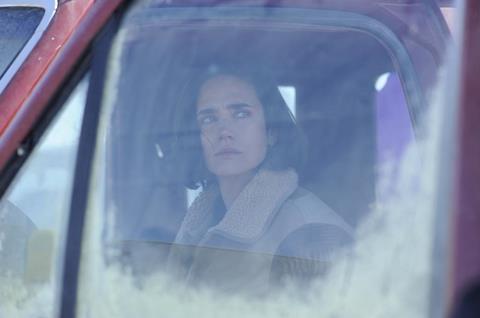 Previous Golden Bear winner Claudia Llosa returns to Berlin competition with her third feature, her first in English. The tale of familial guilt and estrangement, told within a frozen landscape and with lashings of New Age hooey, is gorgeously visualised, very well acted but only intermittently convincing. Nevertheless, with Llosa’s growing reputation and an appealing cast, a strong art house showing could be on the cards.

Both Connelly and Murphy are excellent, she as a mother unable to soften herself for her child, he a man carrying both guilt and a sense of abandonment for too many years.

It opens with a ravishing rendering of a wintry landscape, shining grey, with wind caressing the ice and snow. It’s a long way from the parched Peruvian locations of her debut, Madeinusa, and the Berlin winner The Milk Of Sorrow. And with the change in temperature come decidedly cooler temperaments.

Jennifer Connelly plays Nana, a single mother of two boys, who works on a Canadian farm and is one tough cookie. We first see her delivering a piglet with a co-worker, quickly followed by sex on the premises before clocking off for the day. It’s casual, emotionless. When Nana gets home, the conversation with her father is no warmer, suggesting there is no love lost between them.

It’s surprising when such a no-nonsense individual takes her sons to see a healer, known as The Architect, in the middle of nowhere. But this is a last resort for Nana, whose youngest boy is seriously ill.

It’s from this moment that Llosa splits her narrative, moving between the events that follow the first encounter with The Architect, and a period several years later. Here, a journalist (Mélanie Laurent) seeks the help of Nana’s eldest son Ivan (Cillian Murphy) in locating his mother, who has since become a famous, but elusive artist and healer. Though at first hostile, for very good reason, Ivan joins the journalist in her search.

Each time Llosa steps behind the camera she pushes herself into a new, more expansive milieu – from the Andean village of Madeinusa to the Peruvian capital, Lima, in The Milk Of Sorrow, and now to Canada and the Arctic Circle. Whatever the setting, an interest in the metaphysical remains a constant.

But the superstition under scrutiny in the previous films was so rooted in the communities being depicted that Llosa’s storytelling became a satisfying blend of magic realism and anthropology; in contrast, the beliefs in Aloft – less part of a culture than of cuckoo-land affectation – are harder to swallow and far less interesting.

The film is strongest when charting the tragic consequences of Nana’s pursuit of the gift she’s led to believe she has. When, years later, she’s spouting psychobabble to appease her son, and the now grey-haired woman inadvertently evokes Holly Hunter’s eccentric guru in Jane Campion’s Top Of The Lake, Aloft comes down to Earth with a bump.

Both Connelly and Murphy are excellent, she as a mother unable to soften herself for her child, he a man carrying both guilt and a sense of abandonment for too many years. They keep the story on track until the denouement simply asks too much of them, and us.