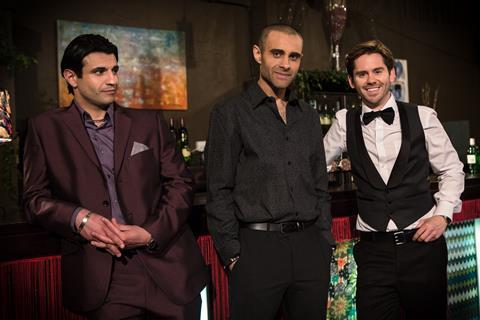 Amar, Akbar & Tony is a rose-tinted romantic comedy set in the multi-ethnic, not terribly glamorous, London suburb of Hounslow. With a Sikh, a Muslim and an Irish Catholic as the romantic leads, it’s a deliberately colour- and class-blind take on the genre, in which first-time director Atul Malhotra makes a sweet, albeit clunky, plea for a multi-racial Britain living in a bubble of sweet-natured harmony.

Well-known British comics Meera Syal and Nina Wadia turn up in two amusing interludes involving a matchmaker, and Malhorta enjoys himself greatly in poking fun at immigrants, their traditions, and their children. It’s all very amiable

The writer-director’s youthful Bend it Like Beckham blast of optimism almost verges on the fantasy. His colourful lessons on first-generation immigrants having the courage to live their own lives will have their own distinct appeal in the UK, potentially around the profitable Bollywood circuit where Amar, Akbar & Tony could edge its way in at the side and tenaciously hang on. A subplot involving a closeted gay Sikh uncle won’t hurt its potential reach.

Certainly, Malhotra has been studying his Richard Curtis – inter-racial romances give him an excuse to schedule more than one wedding sequence per couple, and he doesn’t hold back. Critical opinion may not be warm, but this is on the Nativity end of the British film-making spectrum, and its best shot is a populist one.

Amar, Akbar & Tony is clearly short on funds, though (most evident in an abrasive sound cut and bare-bones production values), and Malhotra ambles along for 93 minutes without much heed to the concept of dramatic thrust. There are a few scenes which amusingly seem to have no actual purpose. This may be charming but it won’t help this relentlessly good-natured comedy break out into wider business like the much more focused Beckham. Still, it knows its market, and there’s no reason to suspect it won’t do very well there.

Inspired by the 1970s Bollywood film Amar Akbar Anthony,  Malhorta’s movie is centred around three childhood friends who grew up together in Hounslow.  Amar (Rez Kempton), whose father opened the 14th Indian restaurant on Hounslow’s high street in 1987, is an aspiring lawyer. Akbar (Sam Vincenti) is a Muslim wide-boy, up for any scheme, and Tony (Martin Delaney) is constantly falling in love with the wrong woman – with serious consequences for Amar. These are Hounslow’s cleaner In-Betweeners, and, at 26, are about to do some serious growing up.

While the three leads are watchable, with Kempton in particular delivering a likable character, Malhorta elicits variable performances from his wider cast which includes Karen David, Laura Aikman and Amrita Charia. Well-known British comics Mera Syal and Nina Wadia turn up in two amusing interludes involving a matchmaker, and Malhorta enjoys himself greatly in poking fun at immigrants, their traditions, and their children. It’s all very amiable. The movie itself is a thinly-disguised plea for tolerance amongst this community itself, rather than taking a wider view of British society which surrounds it.

A man who has been in prison, a woman who became the victim of a sex tape, gay Uncle Jay, a Muslim marrying into a traditional Protestant family, a sister who is no virgin: “we all have a past,” the film says, before adding, “fuck society” (although this clearly means British-Indian society, rather than a Sex Pistols-style assault on the UK establishment). It’s lively, it’s colorful, and it ends in a riot of weddings: it will be interesting to see how Amar Akbar goes about opening up a commerical vein in a society which may be currently very keen to listen to its messages.