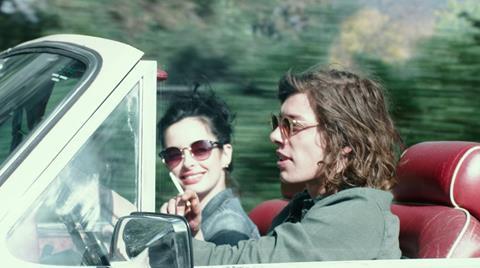 Who would have thought it? It is bleak being a self-obsessed junkie - especially when you steal from friends and take advantage of all around you - and somehow folk just don’t get that you are (in your own mind) at heart an artistic loner bent on some sort of self-destructive journey because you are just not understood.

There are a smattering of cameos that at least kick the film into motion at times but otherwise the film simply meanders along, wearing its Catcher In The Rye rather references smugly on it sleeve but never achieving wit, wisdom or charm.

Yes, the rather mundanely titled Ashman, is another in the longish list of US indies that thinks the junkie life has a certain cinematic quality (though in truth other films have achieved this), with actor Jake Hoffman making his directorial debut with a film strong on smart cinematography and engaging support performances but lacking charm or wit as it plods along on its junkie journey. The film had its world premiere at the Karlovy Vary Film Festival.

The film follows the rather freewheeling weekend journey of Manhattan heroin addict Gus (Benedict Samuel). It kicks off with a failed suicide attempt (and for some reason an obsession with white paint) and then sees him steal a Rolls Royce convertible (a white one naturally) and offer a lift to Ruby (an impressive Krysten Ritter) who is off to a friend’s house out in the country.

For some obscure reason Ruby has a soft spot for Gus (crazy, given his self-indulgent lack of charm) and she take him to the house of her musician friend Logan (Dov Tiefenbach) who is a laid-back hippie-style weekend party that involves much yoga and trippy musing. For Gus it is simply a place to exhibit his sense of superiority and also steal items that he can pawn to get money for drugs.

There are a smattering of cameos that at least kick the film into motion at times – Rosanna Arquette as Gus’s bedridden mother; Iggy Pop as a verbal cellmate and the growling voice of Nick Nolte as a nighttime apparition in a oddball Donnie Darko moment – but otherwise the film simply meanders along, wearing its Catcher In The Rye rather references smugly on it sleeve but never achieving wit, wisdom or charm.

Jake Hoffman (recently seen in Martin Scorsese’s The Wolf of Wall Street, and who is - off course - son of Dustin) shows some style in his filmmaking, but its let down by his own quasi-poetic script which rambles rather than reveals. Australian up-and-coming actor Samuel has the looks and physical grace to convince as the self-obsessed druggie, though best of all is Krysten Ritter who gives the film real energy and dynamism despite her unconvincingly written character.