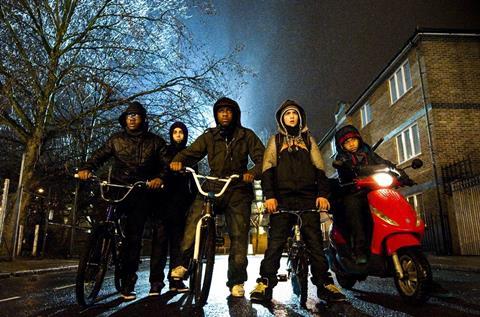 Snarling alien monsters are up against a teenage gang of South London hoodies in Joe Cornish’s pacy, amusing and at times frightening action-adventure romp. Lack of star names and use of very local slang dialogue may hamper international distribution, but the film, which premiered at SXSW in a midnight slot, has a vibrancy and style to appeal to genre distributors and festivals.

Attack The Block is a brilliant bit of high concept plotting – alien hordes fought off by a tough teen gang when the monsters attack the gang’s home high-rise apartment block – and while the notion of anti-heroes fighting off invaders has been done many times before (from Fort Apache and Assault On Precinct 13 through to District 13 and The Horde), there are times here when the script never quite finds the right balance in terms of the gang, as they veer between tough talking defenders and thoroughly unpleasant hoodies.

But debut director Joe Cornish – known in the UK as one half of comedy duo Adam and Joe, and who also recently co-wrote The Astonishing Ant Man with Edgar Wright, and Tintin along with Wright and Steven Moffat – shoots with a lot of style and energy, keeping things tense and exciting and smartly delivering in a running time under 90 minutes.

The film opens in The Oval, in South London, on Bonfire Night (the night in the UK when firework displays are staged), where trainee nurse Sam (Jodie Whitaker) is walking home to her flat in a nearby tower block.

She is held at knifepoint by a gang of masked, hooded, youths who take her mobile phone, purse and ring, but is saved from further assault when a small meteorite falls from the sky and hits a nearby-parked car.

The gang – Moses (John Boyega), Pest (Alex Esmail), Dennis (Franz Drameh), Jerome (Leeon Jones) and Biggz (Simon Howard) – are attacked by a small, white-furred, alien creature that leaps from the wreckage. The gang chase and kill it, dragging its carcass back to the block where they store it in a flat run by drug dealer Hi-Hatz (Jumayn Hunter).

When a second wave of meteorites fall the gang grab weapons and head out on stolen motorbikes and cycles ready to defend their turf. But this time round they are up against much-larger beasties…vicious, shadowy and with snarling luminous teeth. They are hunting the first creature and nothing will stop in their way.

Before long bodies start to fall – police, drug gangster and even members of the hoodie gang – as the youngsters makes a series of bloody stands in various apartments, joining forces with feisty Sam along the way as well as upper-class guy Brewis (Luke Treadaway), who is only in the block looking to buy some marijuana.

The remnants of the gang bond grudgingly with Sam (though naturally she has a tough time accepting her muggers as allies) with gang leader Moses facing up to the ultimate responsibility in terms of taking down the alien monsters. Against all the odds, a tough-talking hoodie teen becomes her – and the block’s – only hope.

Cornish spent a good deal of time doing his research to make sure he got the gang slang just right, and while this is admirable it could also make it hard for certain audiences to figure out exactly what is going on.

A slightly bigger issue is the fact that these young gangsters mug an innocent nurse at knifepoint at the start of the film. Yes, they might be admirable and occasionally engaging as they start the fight back against the monsters, but the film finds it hard to recover from the hard fact that these are knife-wielding young thugs. It tries its hardest to have Sam the nurse get closer to the gang – and they do grudgingly admit they wouldn’t have mugged her had they known she lived in the same block as them – but it can never quite get past the fact they are casually violent muggers.

Smartly the film moves at a cracking pace which means it leaves little time to focus on inconsistencies, and instead focuses on some dark humour as police and gun-toting drug dealers are taken down by the monsters, though most fun comes from a couple of tiny young wannabe gangsters who fill a Supersoaker with gasoline to tackle a monster.

Of the young cast, John Boyega makes the strongest impression, as gang leader Moses, while also impressive is Leeon Jones as Jerome, possibly the most compassionate amongst the bunch. Nick Frost – who starred in Paul, Hot Fuzz and Shaun Of The Dead – crops up as laid-back drug dealer Ron, who runs the secret cannabis lab at the top of the block, and who plays his role purely for stoner laughs.

Attack The Block will likely be a big hit in the UK where Cornish is a media personality and where audiences – especially young urban ones – will appreciate the dark humour and occasionally bloody thrills. The trick will be to see if international audiences can see it as an out-an-out fantasy adventure romp…if so, it could well find an appreciative genre fan-base.