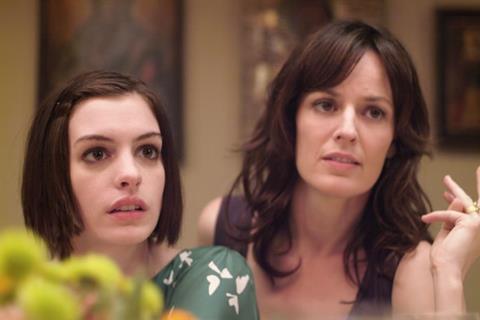 Rosemarie DeWitt does not see her titular role in Rachel Getting Married as a one-dimensional good girl, even though her character is rather more ‘together’ than her troubled little sister who is fresh out of rehab.

“There were times when it felt like a theatre rehearsal.”

Rosemarie DeWitt on Rachel Getting Married

“(Rachel) is a deeply flawed character, and I could see that in Jenny Lumet’s script,” DeWitt says. “We’ve seen this dynamic played out in other situations - usually it’s the good sister versus the bad sister. But these two seem cut from the same cloth, from the same parents. They could equally be bratty and loving and needy and strong.”

DeWitt was drawn to the project for the chance to work with director Jonathan Demme, who she calls “a master”, as well as the richness of Lumet’s script. “Jenny’s writing at times was odd in a really good way. There was a lot to explore and unlock.”

Demme shot the film in a loose style without rehearsals or blocking shots. “There were times when it felt like a theatre rehearsal,” says DeWitt, who has done extensive theatre work herself before TV shows such as Standoff, Mad Men and The United States Of Tara. “I think it took us a few days to trust that Jonathan was making the kind of movie he was telling us he was making. After that, it was incredibly liberating.”

She and Anne Hathaway, who plays her sister, tried to keep a certain professional distance from one another. “Annie and I had to have this tension between us,” she says of the fraught relationship between the characters. “We thought it best we didn’t spend a lot of time together (during the shoot). I think our instincts are right on that.”