André Singer talks to Melanie Goodfellow about his powerful Holocaust documentary, Night Will Fall, which has a groundbreaking broadcast launch on January 27. 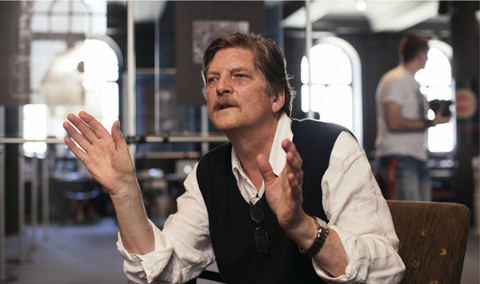 “It was the most appalling footage I’ve ever had to deal with in a pretty long career in film. You start off believing that you’ll get anaesthetised to it, but you don’t,” he says.

Night Will Fall revolves around the making of Sidney Bernstein and Alfred Hitchcock’s propaganda film, German Concentration Camps, commissioned in 1945 to show German audiences the atrocities committed in the name of Nazism, but never screened at the time.

“It was meant to show the German people the error of their ways, but events moved on and the project was shelved,” explains Singer. “In the period from the liberation of the camps in April 1945 through to the Nuremberg trials, the world was in chaos. It was an extraordinary time.”

Bernstein, who would go on to found UK TV station Granada, had experienced the camps first-hand, having visited them within days of their liberation as part of Britain’s propaganda unit.

The film he made with Hitchcock spared viewers none of the gruesome sights. Gruelling footage shows piles of decaying corpses, limbs bent and broken, empty eyes starring glassily into space; emaciated survivors and a chilling visit to a camp warehouse, piled high with children’s toys, spectacle frames, chopped hair and suitcases.

Singer’s film takes its title from the final words of a script by writer and future politician Richard Crossman, “Unless the world learns the lessons these pictures teach, night will fall”.

Some 70 years on, Singer says he grappled with how many of these “pictures” to include in his film. “It’s about how the film was made, why it was made and why it was never shown. You can’t explore this without showing the original imagery, but it was a permanent concern to me throughout the production process just how much we should include,” he says. “If you put graphic imagery like that in context, then it has an impact; if you show it out of context, then it’s pornography.”

Sally Angel, who produced the film alongside US producer Brett Ratner’s RatPac Documentary Films, first told Singer about the existence of the forgotten work in the archive of the UK’s Imperial War Museum.

“She was researching something else and came across [some curators] digitising the film,” says Singer. “It didn’t take a genius to see its potential and by coincidence, I came out of Granada, where Sidney Bernstein was my first boss.”

In documentary circles, Singer is better known as a prolific producer with a slew of credits on works by the likes of Werner Herzog, Joshua Oppenheimer and Malcolm Clarke.

The decision to direct Night Will Fall was borne out of his desire to make the documentary relatively quickly.

“One of the essences of the film was to have the people who participated in the liberation of the camps be the ones who told the story, from the cameramen to the victims. These people were in their nineties. It was the last major chance for people to tell their stories,” he explains.

Singer was also keen for the work to be ready in time for the 70th anniversary in 2015 of the liberation of Auschwitz on January 27, which is commemorated as International Holocaust Remembrance Day.

He recounts how he approached fellow Granada alumni Michael Apted and Paul Greengrass as well as Stephen Frears, all of whom were interested but unable to commit in the timeframe. “Stephen was very interested but he was doing Philomena,” reveals Singer. “I asked him to stay on board as a sort of mentor and executive producer, which he did and he was hugely helpful.”

Singer’s foresight regarding the timing paid off. More than 15 broadcasters - including Channel 4 in the UK, Arte in Germany and France, DR in Denmark, NRK in Norway and HBO in the US - are set to broadcast the film on January 27.

“The joint broadcast was part of the film’s strategy from the beginning,” says co-producer and sales agent Philippa Kowarsky of Tel Aviv-based Cinephil. “Co-ordinating more than a dozen broadcasters all over the world is not simple, but the will was there from day one. Seventy years later, we feel this joint venture is a special achievement for the film, the film-makers and its partners around the globe; it is timely and potent.”