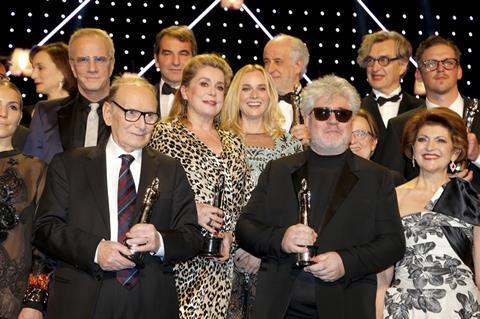 It is a mark of the diversity of European film-making that the nominees at the upcoming European Film Awards (EFAs) range from a Russian retelling of the Book of Job, to a chronicle of a woman’s sexual adventures, to a dark comedy set in a French ski resort.

“The breadth of movies produced every year across Europe is incredible in its scope and diversity, and the European Film Awards is the place where we come together to celebrate that diversity, but also the common cultural themes we Europeans have,” explains producer Mike Downey, deputy chairman of the Berlin-based European Film Academy, which produces the annual awards ceremony.

Every other year the EFAs travel from Berlin to a different European city, and the 27th edition will take place on December 13 in the Latvian capital of Riga, which also happens to be the 2014 European Capital of Culture. The awards ceremony receives a financial boost of $1.2m (€1m) from the host city, which will be Wroclaw, Poland in 2016.

One noticeable omission from the list is the Dardenne brothers’ Two Days, One Night, although Marion Cotillard has been nominated in the European actress category.

For the last two years the winner of EFA’s top prize — Paolo Sorrentino’s The Great Beauty in 2013 and Michael Haneke’s Amour in 2012 — has gone on to win the foreign-language Oscar.

According to The Great Beauty’s producer, Nicola Giuliano, the film’s success at the EFAs — it also won the European director, actress and editor awards — was a crucial factor in helping to secure further prizes. “The accolades we received at the EFAs marked the first step toward international recognition of Paolo Sorrentino’s film, and the most prestigious acknowledgement of the film’s chances abroad,” says Giuliano, adding that the EFAs help to “restore the identity of European cinema”.

Downey adds: “American distributors consistently tell me that not only does the mark of approval matter on the poster, but as a market for other awards around the world. And if you look at this year’s line up, it is clear there will be significant crossover.”

Roger Michell’s Le Week-end is up for the European comedy award, alongside Paco Leon’s Carmina & Amen and Pierfrancesco Diliberto’s The Mafia Only Kills In The Summer.

“We still believe European cinema needs a bit more humour and we had a lot of good feedback from the industry, so it’s something we will absolutely continue,” says Marion Döring, European Film Academy director and producer of the EFAs, of the comedy award that was introduced last year.

This year’s shortlist boasts 50 films from 31 countries, with the winners being voted by the academy’s 3,000-plus members. However, the recipients of the craft awards have already been selected by a special seven-member jury. The lifetime achievement award recipients will be 12 Years A Slave director Steve McQueen and veteran film-maker Agnes Varda.

With more than 1,000 guests expected to attend the ceremony, the EFAs also provides the European film industry with one of the calendar’s best networking opportunities. “When film-makers are at film festivals they are so busy, but when they come to us, they have a whole 48 hours to spend together. Very often you discover that a director has gone on to make a film with an actor or DoP that they discovered at our ceremony,” Döring says.

The EFAs could be on the verge of entering a new era with the arrival of presenter  Thomas Hermanns — the German comedian takes over from Anke Engelke — and a new chair in the form of Polish director Agnieszka Holland.

Says Döring: “It’s a big challenge to produce the awards, with so many different cultures and audiences, but we think it’s very important to continue, because films can help people to understand other cultures and we want them to have as big an audience as possible.”