The VFX of Interstellar 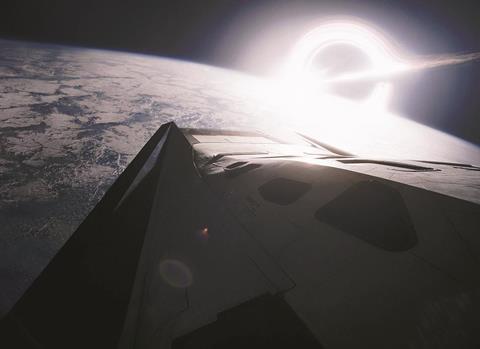 Realism is a word not often associated with science fiction blockbusters, but that was the goal for visual effects firm Double Negative on Christopher Nolan’s Interstellar.

“Our aim was always to tell this extraordinary story in a very matter-of-fact and grounded way,” says Paul Franklin, visual effects supervisor. “There was no intention of allowing the visual effects to grandstand and take over, apart from when we did want to show the awe and spectacle of the universe.”

Having won an Oscar and Bafta for visual effects on Inception, Franklin and his team have been nominated again for Interstellar, which marks the fifth time he has worked with Nolan.

The journey to bring the world of Interstellar to life started at the script stage when Franklin was contacted by the film-maker and given an idea of the tasks that awaited his team — around 450 people from Double Negative would eventually work on the project.

To keep the film realistic, Interstellar’s Earth-based sequences used few visual effects, one of which was a dust storm, so they would contrast with Nolan’s vision of space travel, which would involve a black hole, a wormhole, planets and the tesseract — a four-dimensional space in which time is seen as a physical dimension.

However outlandish the ideas, there would be one constant link. “Chris loves visual effects and loves using them, but he will always try to get it for real in-camera. There is no limit as far as he is concerned, nothing unfilmable,” says Franklin. “This whole approach then extended into what you might consider to be the more conventional parts of the film.”

One such aspect was the film’s spacecraft Endurance, realised through a combination of physical miniatures (from New Deal Studios in California) and full-size models to film exterior shots. Influenced by Apollo archive footage in which you do not see wide shots of the spacecrafts, cameras were hard-mounted to the models to give the film “an almost documentary level of realism so the audience feel they are being taken on this journey”.

The film’s two robots, TARS and CASE, added to what Nolan described as a “tactile sense of reality” — the feeling you could reach out and touch the spacecraft and robots — by using physical puppets controlled on set by actor Bill Irwin, who also voiced TARS.

This physical in-camera approach led to the use of on-set projection, something that had intrigued Franklin and Nolan for a while. “Projection technology has only recently got to the point where it’s flexible enough to use with our film-making process. When we looked into it this time, there’s a new generation of really powerful digital projectors that are designed for live performance,” says Franklin. “We found that if you stacked two of these projectors on top of each other, projecting the images onto the same area of the screen, you could get enough light from them to expose the film negative to simulate the effect of raw daylight.”

The plan was not without its challenges, such as the logistics of moving two projectors — each weighing 600 pounds — and repositioning them between shots, and having to do it in 15 minutes as opposed to the couple of days suggested by the projectionists from Background Images in Los Angeles.

This use of on-set projection meant Double Negative had to create all the content ahead of production, leading to the construction of about 170 shots completely in-camera without additional post-production. (The film also contains around 700 shots that were made in post, in addition to the in-camera shots.)

One such image was arguably among the most arresting and awe-inspiring of 2014: the supermassive black hole Gargantua. Aiming to “adhere to the science as close as possible”, Franklin worked with theoretical physicist Kip Thorne (also an executive producer on the film) who explained the popular conception of a black hole being like a drain was inaccurate — it is more like a sphere. Thorne gave Double Negative the physics that underpin a black hole, from Einstein’s general theory of relativity, which they turned into software to create the image.

A challenge arose when it came to ensuring the black hole was visually appealing as well as scientifically accurate. “A black hole against a largely black background was just going to be a silhouette against a starfield,” says Franklin. “We started talking about the accretion disc, the glowing disc of gas and dust that orbits in the black hole’s equatorial plain which, as it spirals down towards the event horizon, heats up with friction until it’s glowing at insanely high temperatures. I thought we could use the accretion disc to define the negative space of the black hole.”

The software also showed how the gravity of the black hole warps the space around it, leading to one effect that sees light from the back of the black hole travel over and under it making the accretion disc appear as a halo. The result is an image that, as Franklin puts it, is like “a fiery version of the London Underground logo”.

“When I saw the first images coming out of the software, I thought I’d never seen anything like it,” recalls Franklin. “I showed it to Chris on set using my laptop when we were sitting in the back seat of Cooper’s truck, with Matthew McConaughey hanging over the front seat looking as well, and they both thought it looked really cool. At that point, I thought we really had something and we didn’t have to dress it up. It’s a very simple image but, at the same time, it’s produced by this incredibly complex and extremely powerful process.”

The image has proven so notable that Franklin co-authored an article with Thorne about the visualisation, which was submitted to the journal of Classical And Quantum Gravity and will soon be published.

Gargantua was not the biggest challenge facing Franklin and Double Negative. That honour fell to realising the tesseract, which used slit-scan photography, the same technique used to capture photo finishes in horse racing. “Those photos record one point in space across many moments in time, where a typical photo is a moment in time across many points in space,” explains Franklin. “This spoke to Einstein’s concept of a world line where every object is leaving a trail of matter behind us as we move forward into the future. Slit-scan photographs immediately visualised that idea to me and I thought this was a way we could build all the timeline extrusions of all the objects in Murph’s bedroom.”

The tesseract plays a major role in Interstellar’s climax (spoilers ahead), which sees Coop (McConaughey) deliver messages to his daughter Murph (Jessica Chastain) through time. To work out a way of serving that idea, Franklin came up with an expanded lattice, a three-dimensional shadow of a four-dimensional hypercube.

As a result, Double Negative had to model every object in the room and their timeline extrusions, which were sent to the art department. The production designer then built a physical set onto which the 3D models of the timelines were pasted. Later, digitally in post, the timelines were extended into infinity.

This set contained one full recreation of the bedroom with a glass floor and again used front projection to show McConaughey exactly what Coop would have been seeing.

“In some cases we kept that projection and colour corrected it but, for the most part, we separated Matthew from the background and replaced it digitally. However, because we were always working from cinematographer Hoyte van Hoytema’s photography, the result is a photo-realistic representation of what is the most abstract concept I’ve ever had to deal with,” says Franklin.

“Intellectually, this was the most challenging thing I’ve ever had to look into, and then it turned out the technical solution was pretty complicated too.”

Yet for all of Interstellar’s abstract ideas, Franklin feels its biggest strength was Nolan’s decision to ground it in science and reality.

“The interesting thing is that it’s a story about a man being separated from his family, eventually seeing his daughter through this portal from a very remote place. It’s something I can relate to as I maintained my relationship with my kids via Skype the whole time I was away making the movie.”