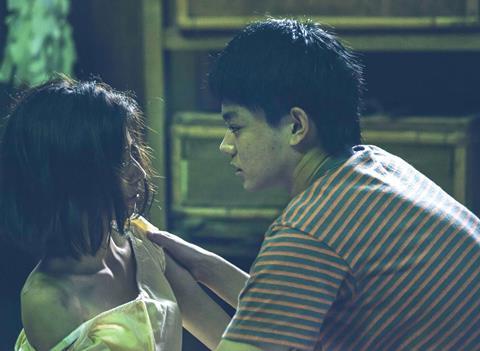 Whatever the qualities Shinya Tanaka’s award-winning novel Dog Eat Dog might have been, Shinji Aoyama’s adaptation is a pretty one-dimensional affair, a portrait of the Japanese man as an incorrigible sex-obsessed male chauvinist whose hands should be tied to keep him from doing any harm, and the Japanese woman as his victim, finally awakening from an age-old slumber of traditionally docile obedience, to assume her own position.

Naturally packed with sex scenes, all of them suggesting the males are badly deficient emotionally in this department, the script relies mostly on its female characters that are unsurprisingly far more alive and interesting than the men in their lives.

Taking place in 1988, for a very specific reason that is revealed only towards the end, the plot of Backwater (Tomogui) follows the coming-of-age process of 17 year-old Toma (Masaki Suda), who lives with his father, Madoka (Ken Mitsuishi) in a small fishing town by a polluted river, compared at one point to a female vagina spiked right in its heart by the bridge crossing it.

Madoka is a dubious character. A small time criminal, a vile, sadistic brute who beats up his women while having sex with them. Toma’s mother, Jinko (Yuko Tanaka) had lost one hand in the war, was cruelly beaten by her husband until she got pregnant, the beatings stopped until Toma’s birth and started again when he was one year old. Fed up with the treatment, she left home to keep a fish shop in town, being replaced by thirtyish bartender, Kotoko (Yukiko Shinohara), who takes the beatings though she can’t really explain why she endures it, when asked by Toma.

The boy’s only concern is not to grow up and become a copy his dad whom he abhors, but genetics seem to have the upper hand because sex is the only thing on his and his early experiences, in the company of his girlfriend Chigusa (Misaki Kinoshita), indicate he might be no different than his father in his possessive, self-centered approach to intimate relations.

All these characters, sketched rather than delved into, clash in what could have been, had the script been more concise and better tied up together, a kind of Greek tragedy. But Aoyama’s insistence of repeating his points again and again, after they have been made perfectly clear, and his lack of interest in his characters beyond the strict sexual preoccupations, past and present, deprives them of any real empathy. The whole story unfolds like a carefully planned equation whose purpose is to show the changes that take place, or maybe should take place, in Japanese sexual customs, symbolically concurrent with death of Emperor Hirohito in 1989, which put an end to the Showa era.

Naturally packed with sex scenes, all of them suggesting the males are badly deficient emotionally in this department, the script relies mostly on its female characters that are unsurprisingly far more alive and interesting than the men in their lives, and the same goes for the performances of the three lead actresses.

It is true of the world-weary, almost but not quite defeated Yuko Tanaka as Jinko, who rises up at the last moment to defend her sex; of Yukiko Shinahara’s warmth and maturity in the role of Kotoko or the fresh, outspoken courage of Misaki Kinoshita as the young Chigusa. Masaki Suda isn’t required to do much more than brood, while Ken Mitsuishi’s Madoka, grossly vulgar and devoid of any charm that might have mitigated the antipathy he generates as Makoda, deserves everything he gets in the film, and much more.